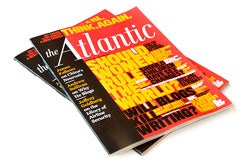 With the recent news of Newsweek’s dire situation, there’s some better news about another iconic magazine brand trying to navigate the digital era.

The 153-year-old Atlantic announced that it is up more than 21 percent in ad pages through June and 155 percent in online ad revenue this year. (Its events division is up 20 percent.)

This is a good sign for an industry that in March said advertising was coming back — even though the numbers indicated a slower-than-hoped-for recovery.

It also means that the magazine had a fantastic second quarter, since it was up just 3.6 percent in pages through March.

Who Might Buy Newsweek — And the Odds They Will