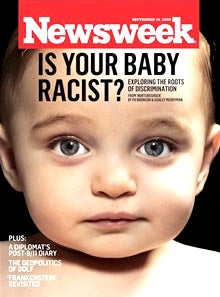 Is there a need for a Newsweek-ly anymore?

That’s the underlying question in the wake of Wednesday’s striking announcement by the Washington Post Company that it is putting Newsweek is up for sale.

With ad pages and newsstand sales tanking — and carrying a name that’s become redundant in the 24-hour news age — the short answer is: Probably not.

Indeed, after admitting the company’s dramatic efforts to reposition Newsweek as a “thought leader” rather than a newsweekly failed, WaPo Co. chief executive Don Graham said, “It might be a better fit elsewhere.”

After speaking to a handful of M&A executives, there seem to be a select few places Newsweek could fit. It’s a short shortlist.

Last fall, Bloomberg bought BusinessWeek, and promptly gutted it – the idea being to cut overhead costs and hope a relaunch and redesign under the Bloomberg BusinessWeek banner would spark an advertising rebound. Whether that plan will work in the long run remains to be seen, but there is already some speculation that Bloomberg might be willing to kick the tires on another “-week” publication. But, as Rafat Ali notes, if that does happen, Newsweek’s 427 staffers (as of December 2009) should have their resumes updated: “If Bloomberg buys it, that might go down to 27.”

Meacham, editor and public face of Newsweek, is putting together his own bid to buy the publication, according to the Awl. He can’t afford it himself on an editor’s salary (even with his Pultizer-prize-winning book deal advances) so he is said to be “lining up financiers” and “has already had inquiries from some very well-off types.” Meacham told the Observer: "We have to figure out what journalism is going to be as the old business model collapses all around us. And I want to be — I want to try to be — a part of that undertaking. Will it work? Who the hell knows. But I’m at least going to look at this." But, according to New York magazine, it appears some younger people at Newsweek would rather that not happen.

It would be highly unlikely for a bunch of reasons (Newsweek’s alleged liberal bent, the fact that it’s a magazine and not a newspaper or MySpace) but, as evidenced during its quarterly earnings report, News Corp. does have plenty of cash to play with, and chairman Rupert Murdoch hinted the company may look to do so in the near future. And Murdoch’s name is mentioned when virtually anything goes up for sale.

Dennis owns “The Week,” one of the few newsweeklies to show signs of surviving the segment’s downward spiral. (He likes it so much, in fact, he held onto it when he sold most of his U.S. publishing assets, like Maxim.) And like Murdoch, Dennis’ name comes up a lot when magazines are put on the block. But he would also be content to stay out of the U.S., too.

On Wednesday, Time Inc. – owner of Newsweek rival Time – reported its first quarter of advertising growth in more than two years. Time Inc.’s online revenues were up 20 percent. And – in response to the Newsweek sale announcement – Time Inc. pointed out that unlike its newsweekly counterpart, Time would be profitable in 2010, just like it was in 2009. And Time Warner chief Jeff Bewkes is a TV guy with an eye on TW’s stock price, so unless there’s a dramatic, fundamental change in his philosophy, there’s simply no chance of a Time-Newsweek merger.

Given Newsweek’s high-profile brand name, there will probably be some high-rollers kicking the tires. A few that were suggested today: Joe Mansueto, the billionaire owner of Fast Company and Inc. who in 2005 bought the then-troubled business magazines for $35 million; Donald Trump, whose failed attempts in magazine publishing are well-documented; Bono’s Elevation Partners, a private equity firm with magazine interests, including Forbes; or even Barack Obama, a Newsweek cover favorite, after he loses the 2012 election.

The most likely scenario, from media and private equity buyers I’ve spoken with. Washington Post fails to find a buyer, and eventually pulls the plug on the print edition. But, as Gabriel Sherman noted, even that outcome would present problems, given Newsweek’s name as translated online: “’News’ and ‘week’ doesn’t work on Web.” It would mean a serious brand overhaul – and that might be something worth paying for.

Newsweek Goes Up for Sale