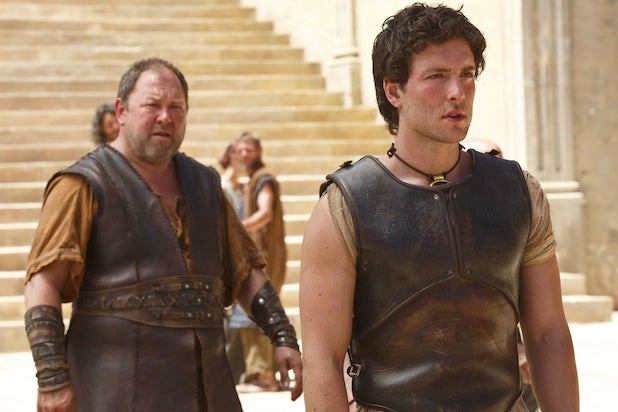 BBC America has picked up Season 2 of fantasy drama “Atlantis” after just one episode.

From the creators of “Merlin” and “Misfits,” “Atlantis” delivered the highest rated series premiere ever for the cable channel’s programming block, Supernatural Saturday, with 838,000 total viewers.

“‘Atlantis’ is off to a fantastic start and is the centerpiece of our Saturday nights for the next 12 weeks. We’re committed to bringing our viewers even more entertaining episodes inspired by Greek mythology from Howard and the talented team in Season 2,” said BBC America’s senior vice president of programming, Richard De Croce, in a statement.

Capps, Murphy and Overman said: “We are all thrilled at Urban Myth Films that ‘Atlantis’ has been re-commissioned and look forward to continuing the legend next year.”

The speedy renewal represents a huge vote of confidence in the drama’s ability to sustain its premiere audience in light of it premiering on the same day as the “Doctor Who” 50th anniversary episode. The special, “Doctor Who: The Day of the Doctor,” was the cable channel’s most watched telecast ever and broke Twitter and Tumblr social media records.

Including the primetime encore, the 75-minute “Doctor Who” special delivered 3.6 million total viewers on Saturday and was probably a great boon for the “Atlantis” premiere episode.

“Atlantis” follows Jason (Jack Donnelly), Hercules (Mark Addy) and Pythagoras (Robert Emms) who battle against some of the most famous names of Greek legend, often in unexpected forms.

The series also stars Jemima Rooper, Aiysha Hart, Sarah Parish, and Juliet Stevenson. The current cast of characters are expected to all return for Season 2, as well.