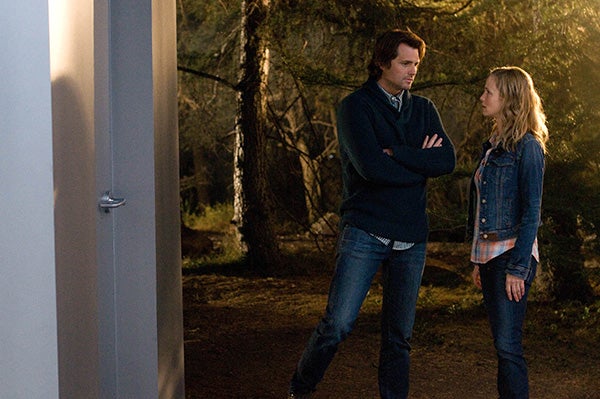 To find fault with the “Atlas Shrugged” franchise because of its politics is like complaining about “Birdemic” because it gets the ornithology wrong. Why dwell on the details when there are giant, embarrassing flaws staring you in the face?

You’d never know it from the movies, but Ayn Rand’s novel tells a page-turning story amidst its political philosophizing. In the trilogy of films made from the book, which now culminates with “Atlas Shrugged III: Who Is John Galt?”, all that’s left are the self-declarations, in which characters generally speak at rather than to each other, along with a very clearly defined set of heroes and villains. The good guys tell it like it is and are never wrong, while the bad guys bully each other and make wobbly rationalizations.

(Naturally, when a good guy drops truth on a bad guy, the latter can only blubber and stammer, because otherwise we might get a genuine exchange of ideas.)

“Atlas Shrugged III” and its predecessors aren’t bad movies because they’re propaganda; any number of movies are, overtly or covertly. The “Atlas Shrugged” movies are bad movies because they’re bad movies. They are written in such a way that the most interesting events take place off-screen and are described by excessive narration, whereas the scenes that do occur on camera are generally overly talky and didactic.

They are bad movies because they deal with titans of industry and the machinations of the government, and yet they are produced so cheaply that the grandeur of the characters and the subject matter are dwarfed by the middling sets, the stock footage and the often downright embarrassing special effects.

They are bad movies because the performances are almost entirely terrible, with the occasional talented character actor (in “ASIII,” they include Stephen Tobolowsky and Mark Moses) giving his or her all to elevate the material.

They are bad movies, because they are shot in a flat, non-dynamic manner that calls to mind made-for-basic-cable films (at their best) and reality-show true-crime recreations (at their worst). And let’s not forget the score (by Elia Cmiral, “Battlefield Earth”), which sounds like a collection of cues from the Lifetime Original Movies library.

Love Ayn Rand’s politics or hate them or lie in the middle, these movies are shoddy. And thankfully, they are now over.

“ASIII” picks up where its predecessor left off, with Dagny Taggart (Laura Regan of “Mad Men,” stiffly picking up the baton from earlier Dagnys Samantha Mathis and Taylor Schilling) crash-landing in the hidden valley of John Galt (Kristoffer Polaha, done up with poofy hair and leather jackets that call to mind Lorenzo Lamas post-“Falcon Crest” and pre-“Renegade”).

Galt has created a utopia with the best and brightest minds and corporate magnates, who have been disappearing from a corrupt society over the course of the previous two films. Dagny must decide whether to join their strike, which would mean allowing her beloved railroad to collapse for good, or to return to the world to fight for its survival, despite the excessive government interference that is gumming up the works.

Putting aside the film’s partisan red meat — cameos by Sean Hannity, Glenn Back and Ron Paul, and the monotone narrator perking up when he gets to say the phrase “government-backed union thugs” — this is an altogether sloppy piece of work.

From two scenes about the ultimate destiny of Dagny’s sister-in-law, which seem to have been awkwardly shoehorned into the movie after the fact, to a love scene in L.A.’s Union Station destined to enter the Bad Movie Sex Scene Hall of Fame, “ASIII” feels like the most scattershot entry in the trilogy, despite a relative rally toward competence with the second movie.

Ayn Rand’s books remain in print and, for better or worse, continue to shape minds and win converts. For all the lasting impact of her literature, it’s difficult to imagine anyone not already on board with her ideas being swayed by these singularly awful screen adaptations.