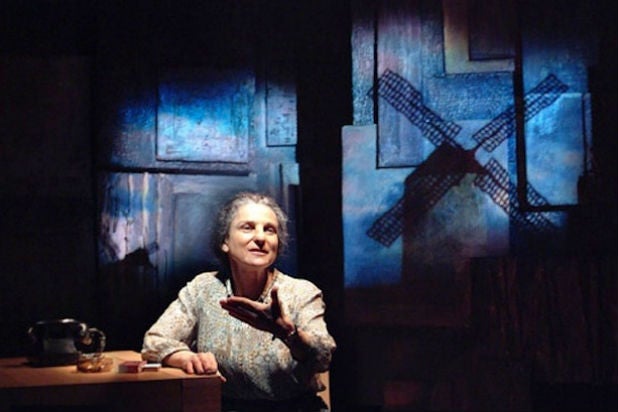 While Middle East peace negotiations are stalled, audiences in the nation’s capital are being treated to a rich array of theatrical presentations about the unresolved issues of this volatile region for the past month.

Tovah Feldshuh brought her tour de force performance as Golda Meir in William Gibson’s “Golda’s Balcony” to Theater J. Originally the longest running one woman show on Broadway (at 15 months) Feldshuh is captivating as the Israeli ruler, who reminisces about her Zionist past while the country faces attacks from neighboring Arab countries in the 1973 Yom Kippur War. Golda also struggles with personal issues while facing political challenges that come with ruling Isreal.

For 90 minutes, the cigarette-smoking Feldshuh highlights the political debates that run throughout Golda’s career, as well as the struggles she faced as both wife and mother. The play devotes significant time to exploring Golda’s strategy regarding the possible use of nuclear weapons against Arab aggressors. Not surprisingly, Feldshuh was nominated for the Tony Award for Best Actress and won the Drama Desk Award for Outstanding Solo Performance for this role. The years have not diminished her powerful acting.

Theater J, which is the Jewish theater based at the Washington D.C. Jewish Community Center, showcased this play in its Voices from a Changing Middle East Festival. This year, the festival focuses on “Narratives of Nation Building.” Its purpose is to allow playwrights to “recount debates that divided, costs that were incurred, and the lives that were lost.”

With that purpose in the mind, Theatre J also staged a workshop presentation of Israeli playwright Motti Lerner’s powerful “The Admission,” a collaboration with the Cameri Theatre and the Arab-Hebrew Theatre of Jaffa.

Also read: Hollywood Makes It Hard for Religious Filmmakers to Do Their Job (Guest Blog)

The play reading evokes memories of old wounds between an Israeli and a Palestinian family living in Haifa. Giora, the son of the Israeli patriarch, tries to discover what happened 40 years ago when his father was a soldier in an Arab village. Actor Danny Gavigan, sporting crutches, gives a riveting performance as Giora, an injured soldier struggling not only to unearth his father’s secrets, but also with his handicap and his brother’s death.

Critics and audiences responded so well to the play’s readings that it will be moved in May to the Studio Theatre in a production supported by restaurant owner, Andy Shallal.

Los Angeles audiences will soon be able to see the talented Gavigan, as it’s just been announced that he will split his time between California and his new role as a company member of Everyman Theatre in the Washington-Baltimore area.

One can go from one Middle East conflict to another in the Washington theater scene, as Arena Stage just had a run of Lawrence Wright’s “Camp David.” The play is a reenactment of the ultimately- productive peace accord meetings between President Jimmy Carter (Emmy winner Richard Thomas) and his wife Rosalynn (Tony nominee Hallie Foote), with Israeli Prime Minister Menachem Begin (Tony winner Ron Rifkin) and Egyptian President Anwar Sadat (Khaled Nabawy). Directed by artistic director Molly Smith, this world premiere could not have been timelier in the nation’s capital.

As many of the encounters between the two leaders evoke humor, one cannot help thinking this plan to seclude the opposing sides had a method in its madness. One fascinating scene is when Begin and Sadat share how they both learned English and almost bond over the exchange.

Arena had a gala opening with Carter and his wife, as well as policy members in attendance. Maybe Secretary of State John Kerry should have had the Mideast peace negotiators see the play as required reading. Or better yet – have them reenact the plot in the secluded woods of Camp David.

Even Filmfest DC, which just finished its 28th year, offered films from the Middle East. Surprisingly, two Middle East films contained comical themes to fit in with the festival’s strand, “The Lighter Side,” proving “politics isn’t the only funny thing in Washington!” Reshef Levi‘s funny “Hunting Elephants” is a bank robbery caper. Starring Patrick Stewart as a visiting British relative, three older men and a grandson attempt to outsmart bank security. Maybe the humor is helped by no mention of Middle East politics.

The more serious film from the region is Egyptian Amr Salama’s dark comedy, “Excuse My French,” a poignant tale chronicling how a young Egyptian Christian keeps his religion under wraps in his public school where Islam is the dominant religion.

Year after year, Filmfest DC has brought the best of international films to Washington audiences. But the long tradition of the festival might be truncated next year. Director Tony Gittens is warning that 2014 might be its last year, claiming “Filmfest DC has contributed to Washington’s cultural vitality and helped put the city on the national and international map as one of this country’s most sophisticated centers of interest in outstanding movies from around the globe. Unfortunately, economic pressures in putting on this two-week event have become too much for us to continue without significant financial assistance. As a result, this year’s Filmfest DC is expected to be the last one.”

The festival plans to hold a community meeting next week, and hopefully they will find some angels to keep it going. As the issues in the Middle East continue to be sensitive and prevalent, it’s great that Filmfest deputy director Shirin Ghareeb will continue to offer the Arabian Sights Film Festival later this year.

Ghareeb prides herself that “this is the longest running festival in the U.S. presenting films from the Arab world. Arabian Sights features award-winning and exceptional films and has grown internationally in reputation and recognition.”

Surely there will still be a place for this Middle East focused film festival in Washington later in the year.

BIO TheWrap Staff
Aviva Kempner is the co-director with Ben West (Cheyenne) of "Imagining the Indian: The Fight Against Native American Mascoting" documentary. Jessie Atkin is the communications coordinator for the documentary.