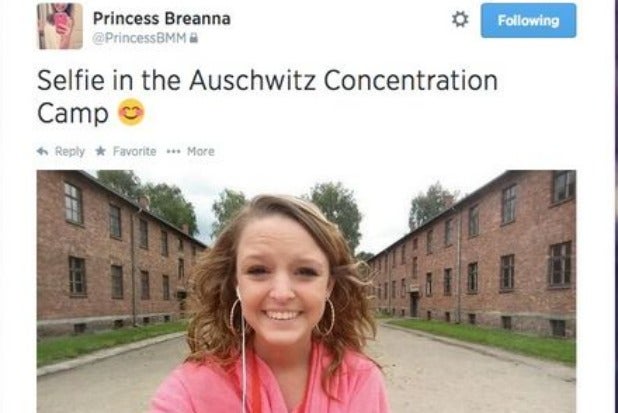 Breanna Mitchell’s picture of herself at Auschwitz is, on its face, tasteless: It’s easy to see her as another narcissist who can’t visit a place of profound mourning without making it all about her. Even the news media’s term for the picture — “Auschwitz selfie” — sounds like something that would appear in a tacky satire.

The picture she posted June 20 has fueled thousands of outraged tweets and dozens of news stories — including those calling her disrespectful and abusive.

“Once again the millennial generation manages to out-disgrace themselves,” wrote one tweeter.

Another imagined Mitchell posting selfies with Adolf Hitler, and from the burning World Trade Center:

But the selfie isn’t exactly what it appears to be. Mitchell, a recent high school graduate from Alabama, says she took the picture because she studied World War II and the Holocaust with her father before he died, a year to the day before her picture was posted.

“World War II’s the only thing that’s ever interested me in history, and his favorite part of history,” Mitchell told TakePart Live. “And I talked to a Holocaust survivor in ninth grade.”

So perhaps it isn’t all about her. Perhaps it’s about honoring her dad, and learning history, and not about trivializing the place where more than a million Jews, Poles, Romani and homosexuals were murdered.

I went to Auschwitz in 2010. It is too overwhelming for small children, but very much a place for teens. They’re the ones most responsible for storing what they see there, and remembering it when the rest of us are gone. Auschwitz is not, by any means, a place that discourages pictures.

Also read: Meet the Man to Blame for Selfies

The rest of us take pictures. Our tour guide, a young Polish woman who lost relatives at the camp, led us from room to room, presenting the evidence of the atrocities. Now a museum, Auschwitz seems flawlessly designed to lay out the simple truth of what happened.

Even now, there is denial, and disinterest. Though Germany and Poland share a border, our tour guide told us that of the more than 1 million people who arrive there each year, only about 60,000 are German.

Auschwitz minimizes nothing. There is a massive display case full of coiled eyeglasses, taken from people before they burned. A roomful of their shoes, a roomful of their suitcases. The most agonizing display case — about as large as an aquarium tank for seals — is filled with the artificial limbs of the dead.

Were the Nazis so cowardly that they killed Jews who had lost their limbs fighting in the first world war for Germany? Yes, says the room, here is proof. (The museum says it has about 110,000 shoes, more than 3,800 suitcases, and 470 prostheses and orthoses.)

The guide wants us to take pictures, because we are documenting the atrocities. We are to take the pictures home to show other people exactly what happened. I took hundreds.

I never look at them, but I have them. In case someone someday tries to tell me, in dozens of years, that the Holocaust wasn’t so bad. But I saw it, I’ll tell them. The evidence is here. It happened and can happen again.

Auschwitz is the logical conclusion of a line of thinking that holds that some people are better than others. The museum feels designed, most of all, to make you sick at the notion that any human is above any other. It is designed to make you bristle at the slightest dehumanization of other humans, because this is where it can lead. Where it has already led.

If you go to Anne Frank’s secret annex in Amsterdam, you may note with surprise she had clippings of movie stars on her walls. She was in some ways a normal teenager who liked silly, trivial things, a break from the pain of real life. She might have loved Twitter and selfies. And she is the most famous person to have documented the nightmare of Nazism.

Breanna Mitchell is no Anne Frank. Her handle, @PrincessBMM, helps us imagine a privileged child without a real care in the world. But she is exactly the kind of person we need thinking about the Holocaust, because she’s the last person we would expect to.

Imperfect as her picture was, she is an emissary to other American princesses who might not otherwise think of a place across the ocean, whose fathers might not have told them about the horrors that happened there a lifetime ago. She went to a real place, where girls her age died, and took a photo to prove she was there.