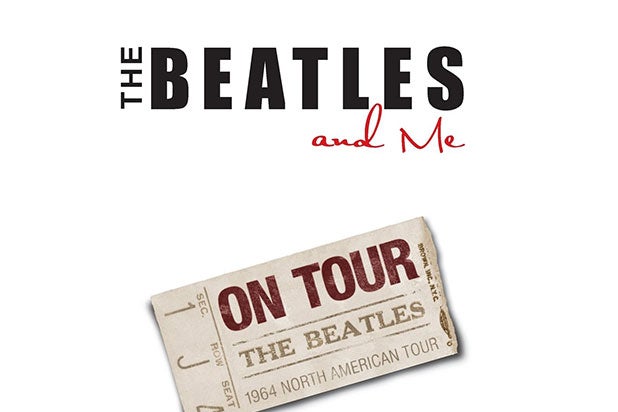 "The Beatles and Me on Tour"

If you think you know everything there is to know about The Beatles, think again.

My new book “The Beatles and Me On Tour” chronicles the inside story of what happened when The Beatles embarked on a record-breaking, pandemonium-inducing tour of the U.S. 50 years ago this summer.

This is the first chronicle of that tour told by an insider. As a young reporter for the London Daily Express, I had unrestricted access to the boys fresh from Liverpool on their incredible first journey that lasted 35 days and made rock and roll history.

Here are 17 takeaways from the time I spent with John Lennon, Paul McCartney, and Ringo Starr:

1. The Beatles adored Elvis Presley — and I finally trooped along with them when they met the King in the summer of 1965. However, Elvis was jealous of The Beatles. They had knocked him off his top music perch, but worse, he hated grinding out three cookie-cutter movies a year: The Beatles’ first film “A Hard Day’s Night” was considered an instant smash. When we trooped along to Elvis’ Beverly Hills house, it took 30 minutes for them to warm up to each other. Finally, Elvis jumped up: “I’m going to bed … I thought you guys came to jam.”

That broke the ice, and Elvis and The Beatles began an impromptu jam session in the living room. Several years later, The Beatles felt betrayed by Elvis. In trying to cozy up to President Nixon, Elvis went to the White House and badmouthed the Fab Four to Nixon.

“The Beatles laid the groundwork for many of the problems we are having with young people today,” he said, “by their filthy, unkempt appearances and suggestive music.” (A strange comment coming from hip-swiveling Elvis.)

2. was dating Joan Baez when he met The Beatles and introduced them to high-class marijuana in a motel outside JFK Airport the night before The Beatles flew home following a triumphant American tour in Sept. 1964.

They became close pals, but from the beginning Dylan warned Lennon to keep his hands off Baez. Lennon fancied her a lot, and she liked him because both were passionate about their opposition to the Vietnam War. Lennon was married to wife Cynthia at the time, but that didn’t stop him from playing the field.

3. Lennon’s greatest fear in life was being called up to do military service in Britain. In Key West, Fla., during a brief stopover to avoid Hurricane Dora, he told me: “Elvis was forced to go into the Army — and it almost destroyed his career. If we’d gone into the military there would have been no Beatles.” One day, Lennon said, he received an official-looking envelope in the mail with a British government stamp on it. For three days he was too scared to open it. When he did, he discovered a letter from the British government telling him he’d been awarded an MBE by the Queen.

Also read: Beatles Event Series in the Works at NBC

“If they had called me into the British Army,” Lennon told me, “I would have emigrated to Ireland.”

4. In 1963, Harrison came anonymously to America to visit his sister Louise, who was living in Illinois. He was totally unknown in the U.S. at the time but huge in Europe. And he loved being able to walk around the streets of Benton, a small coal-mining town 300 miles from Chicago, as well as in Manhattan, without being recognized. On that trip he splurged on a Rickenbacker guitar for $400. Louise was shocked by her brother’s extravagance. “You’re crazy — you must be rich,” she said. In 2013, that guitar sold at auction — for $657,000.

5. Starr said he was terrified that after becoming sick with a throat infection in 1964 and being forced into the hospital just a few weeks before their important American tour, he would be dumped by manager Brian Epstein. And in fact they did replace him on the Australian tour with a session drummer named Jimmy Nicol.

For 13 days in 1964, The Beatles performed without Starr. He finally discharged himself — and flew 36 hours to Australia to rejoin the boys. Nicol got a gold watch from Epstein — and vanished into the mists of time to become “The Forgotten Beatle.”

Also read: Peter Mehlman: Being Me Is a Full-Time Job (Exclusive Excerpt)

6. Model-turned-actress Peggy Lipton told me in the summer of 1964 at a Beatles party in Beverly Hills: “I’m madly in love with Paul — and I want to marry him.” McCartney, of course, married Linda Eastman — and Peggy became the wife of record mogul Quincy Jones.

7. When The Beatles agreed to let Epstein become their manager, Epstein was worried about what his mother and father would say because at the time he was running the record store in his father’s Liverpool furniture shop. When he broke the news, he told them: “Don’t worry. I won’t neglect the shop. The Beatles will only take up my time for two days a week.”

8. Epstein, of course, was a shrewd man, who cannily turned the greasy, leather-clad lads from Liverpool into clean-cut, mop-topped rock and roll icons. But he blundered badly on the merchandising front. Not realizing the potential of selling Beatles stuff (merchandising rock gear was still in its infancy), he gave away the rights to a neophyte company. They collected 90 percent — leaving The Beatles a paltry 10 percent!

9. The Beatles were angry with Muhammad Ali (then known as Cassius Clay). In February 1964 in Miami, they went to a gym expecting to have their picture taken with then heavyweight champion Sonny Liston. “I don’t want my picture taken with those sissies,” Liston snarled. So they were conned by photographer Harry Benson into climbing into the ring with Clay, considered the no-hope challenger. “He made a fool of us,” Lennon said after Clay used them as clowns in a photo op session before going on to take Liston’s heavyweight crown.

10. The Beatles were always wary of show business celebs who wanted to meet them to exploit the whole Beatlemania thing. Jayne Mansfield enticed them to show up at the trendy Whisky a Go Go Sunset Strip nightclub. The evening turned into a disaster after a slightly sozzled Harrison tossed a drink at a photographer who refused to stop taking pictures. The drink missed the shutterbug, instead dousing movie sex symbol Mamie Van Doren, who was sitting nearby.

11. When Liberace met The Beatles in Las Vegas, he told them with a straight face, “I love the way you play the piano.”

12. On tour, Lennon and McCartney were forced to write their new songs on old-school exercise books whenever they found a spare moment on tour. Epstein had them locked into a fierce timetable that required them to churn out new albums several times a year.

13. The Beatles’ favorite drink on tour was rum and coke.

14. Lennon liked to call me to come to his suite to play Monopoly at 2 a.m. He cheated a lot if the roll of the dice didn’t land on the property he wanted.

15. “Gambling is evil,” Lennon told Sahara Hotel executives while posing for a picture in front of a slot machine that had been hauled into his Las Vegas hotel suite. But he wasn’t serious. He played poker for money — and lost quite a bit to photographer Curt Gunther and me.

16. The Beatles all smoked like chimneys — in private and at press conferences.

17. Starr’s favorite snack dish on tour: “English baked beans on toast.” He often packed cans of beans in his suitcase — and liked to eat them cold.

Read more in Davis’ latest book, “The Beatles and Me on Tour,” out now.