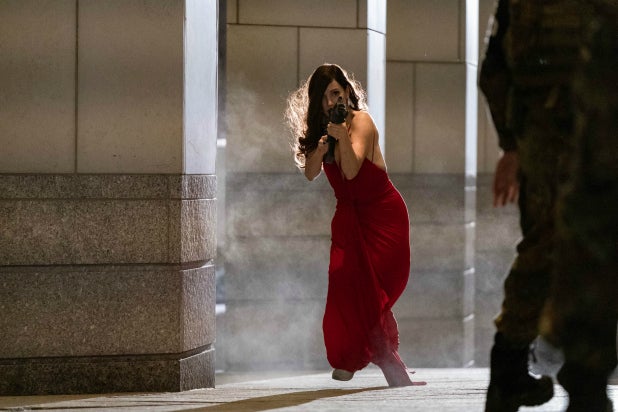 A movie with more potential directions than its globe-trotting-assassin heroine has wigs, “Ava” offers moments that suggest it might have succeeded as an action thriller, a dysfunctional family drama, or a character study. Since it commits fully to none of these, the results are the sort of bland bang-bang-pow that keep Nicolas Cage and Bruce Willis afloat in between movies that critics actually like, or even see.

“Ava” comes with a pedigree — Tate Taylor (“Ma,” “The Girl on the Train”) behind the camera, and leading turns from A-listers like Jessica Chastain, John Malkovich, Colin Farrell, and Geena Davis — but the results are fairly generic; for every scene that draws you in with some smart writing or memorable acting, there are four more that suggest the kind of movie that gets released directly to airlines.

We meet Ava (Chastain) on a job in France, pretending to be a hired driver so she can dispatch a corrupt financier played by Ioan Gruffudd. We’re meant to know she isn’t your average hired killer: Ava wears bold lipstick, quotes Croesus, and like to quiz her prey about their wrong-doings before she dispatches them.

Her violation of protocol gets her in trouble with her handler Duke (Malkovich), but it’s a nearly-botched job in Saudi Arabia that makes her a target for her shadowy organization, run by another of Duke’s protegés, Simon (Farrell).

So yes, it’s the hired-killer-becomes-prey story, and while the action sequences are serviceable (this is nowhere near “Atomic Blonde” territory), it’s all fairly familiar. The screenplay by Matthew Newton ultimately skims the surface of that plot to leave room for Ava’s struggles with addictions and her issues with mom Bobbi (Davis, who got to play the assassin herself in “The Long Kiss Goodnight”) and with sister Judy (Jess Weixler, “Chained for Life”), who’s now living with Ava’s ex Michael (Common).

The scenes with Chastain, Davis, and Weixler playing out their fraught and testy familial roles are the highlights of “Ava,” and one imagines the movie pursuing this avenue more aggressively if it weren’t trying so hard to be sold to territories that want more kicking and shooting and less heartfelt dialogue.

There are pleasures to be found along the way — the energetic hand-to-hand combat scenes and stunt work, an all-too-brief appearance by the captivating Joan Chen — but the movie lacks the alchemy to put Jessica Chastain in a soul-baring Narcotics Anonymous meeting alongside Jessica Chastain shooting up a bunch of German soldiers while wearing a long red evening gown. Not that those two elements couldn’t exist side-by-side, but Taylor and Newton never quite make the pieces fit together.

The details aren’t sloppy, but neither are they noteworthy; the cinematography by Stephen Goldblatt (“Our Souls at Night”) is perfunctory and uninspired, and the score by Bear McCreary (“Fantasy Island”) relies too much on droning repetition. To their credit, even if this was a paycheck gig for Malkovich and Farrell, they do seem to be making an effort and to be enjoying the chance to work opposite each other (and opposite Chastain).

“Ava” is the kind of movie that wants to appeal to all demographics, but in doing so, it spreads itself so thin that it will please very few.