I just saw “Avatar.” And for the first time in a very long time, a movie that made a great, big promise delivered. 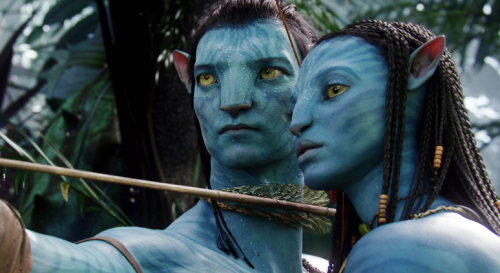 It’s been more than a year since I’ve been hearing that James Cameron would reinvent moviemaking with “Avatar.” That he was marking a milestone with this film that was the equivalent of silent films to talkies, or black and white to color.

Right. And once I heard that he was the king of the world.

Going to the movies for a grown-up is too often a series of ongoing disappointments and adjusted expectations. So I was braced for anything.

But I had learned by now to be careful in announcing Cameron’s demise just because his own overblown, self-aggrandizing pronouncements tempted one to do so. I wrote some of those epitaphs 12 years ago before “Titanic" came out, and learned my lesson then.

If that film went on to become the highest-grossing film of all time, “Avatar” may well bust through “Titanic’s” record.

The film succeeds where even the visionary Robert Zemeckis (“A Christmas Carol”) falls short. “Avatar” takes two (at least) kinds of technology  — motion capture and classic visual f/x, along with 3D projection (which involved his inventing a camera contraption he wore on his head) — and weaves a  gripping, epic tale.

That’s what the movies do, when they’re great.

The two Na’vi characters, 10 foot creatures played by Sam Worthington and Zoe Saldana colored bright blue, with rabbit-like ears, are entirely believable. The technology has gone far enough to allow those virtual characters to emote broadly and subtly too, to laugh and cry.

And for once, the 3D technology is used to serve the story. Things that reach out to touch you in the audience feel like they ought to. Actually, you feel more like you enter the world of the Na’vi, rather than the reverse.

The film has a political message about America’s ham-handed forays into foreign wars — the Na’vi defend themselves from war-mongering Americans out to grab the natural resource in their environment that humans crave. But more to the point, it entertains; the movie manages to weave the latest technology in the best possible way into telling a story.

Sam Worthington plays a paraplegic Marine, who visits a dangerous new planet via his avatar, the aforementioned 10-foot, blue version of himself, yielded by cloning and the kind of technology that only exists between Cameron’s ears.

But in short order, you forget that you are watching 10-foot blue aliens.

The flora and fauna of the planet Pandora, where they live, is just spectacular. The colorist on this film should get special mention – the blues and purples and ineffable, undulating whites – are exquisite.

And in the final segment of the movie the Na’vi take on the humans in a battle scene worthy of the best in the film vault.

So – a political story about American selfishness, a love story between a man and woman kept apart by their cultures (and species, if it must be said), and a bang-‘em-up wartime narrative with the most spectacular images this side of “Star Wars.”

Works for me. And it will work for Twentieth Century Fox, to the tune of hundreds of millions.

This is just what ailing, uncertain Hollywood needs. And if "Avatar"  is not a top contender for Best Picture at the Oscars this year, then something is terribily wrong in this town.