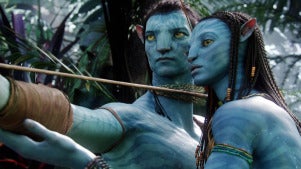 " continues to bestride the DVD rentals and sales charts in its third week of release. Even in 2-D, the popularity of Cameron’s sci-fi epic remained unstoppable, consigning the competition to "also-run" status.

Sliding into the number two position on the rental chart and the number three spot on the sales end was Meryl Streep’s romantic comedy "It’s Complicated," according to the tracking company Rentrak. In its first week of release, "The Rock"s’ family film "The Tooth Fairy" captured second and third place on the sales and rental charts respectively.

Also debuting last weekend, Amy Adams’ romantic comedy "Leap Year," which underperformed at the box office, but took advantage of the weak competition to grab fourth place on the rental charts and fifth place on the sales side.

In its seventh week of release, Sandra Bullock’s football drama "The Blind Side" continues to be a fan favorite. The Oscar winner was in fourth place on the sales chart and cam in fifth on the rental charts.

Box office disappointment "The Lovely Bones," took the fifth spot on the rental chart in its third week of release. However, "Nine," which also left moviegoers cold, failed to find a second life on DVD. The movie grabbed the tenth spot on Rentrak’s sales chart and failed to even register on the top ten rentals for the week.

New Films going into release this week such as "Daybreakers" and "Edge of Darkness," were box office welterweights and seem unlikely to challenge "Avatar"s’ dominance. Barring a major upset, the science fiction film will hold onto its spot at the top of the DVD charts.