The ADG separates its film prizes into three distinct genres.  "Avatar" was honored for excellence in production design in a fantasy film; "The Hurt Locker" in a contemporary film; and "Sherlock Holmes" in a period film.

"Avatar" and "Sherlock" are both nominated for the Academy Award for Art Direction, along with "The Imaginarium of Dr. Parnassus," "Nine" and "The Young Victoria." 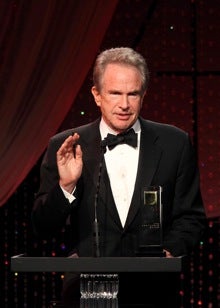 An Absolut Vodka commercial was honored with the award for Commercial or Music Video.

In addition to the competitive awards, Malcolm F. Brown, Bob Keene and Ferdinando Scarfiotti were posthumously inducted into the Art Directors Guild Hall of Fame.  Michael Baugh was given the Creative Leadership Award, while Terence Marsh received the Lifetime Achievement Award from actor Gene Wilder.

Warren Beatty was given the Outstanding Contribution to Cinematic Imagery Award. His rambling eight-minute acceptance speech — about the same length as the speech he gave when receiving an honorary Oscar in 2000, which was the longest Oscar speech in decades — used vomiting as its central metaphor, to the clear discomfort of some in the audience.

Comparing the art directors he worked with to his mother, who he said cradled his head when he vomited as a child, Beatty concluded his remarks by saying, "Thank you for holding my head."

The Beverly Hilton’s International Ballroom is having a busy few days: after the ADG Awards on Saturday, the American Cinema Editors’ Eddie Awards come in on Sunday.  (In fact, ADG guests were cautioned not to leave with the table centerpieces, because they’d be reused by the editors the following night.)  On Monday morning, the Academy hosts its annual Nominees Luncheon in the same room.

WINNERS FOR EXCELLENCE IN PRODUCTION DESIGN FOR A FEATURE FILM IN 2009:

WINNERS FOR EXCELLENCE IN PRODUCTION DESIGN IN TELEVISION FOR 2009:

WINNER FOR EXCELLENCE IN PRODUCTION DESIGN FOR COMMERCIALS AND MUSIC VIDEOS FOR 2009: