With just a week left to before “Avatar” hits theaters, Fox is going for broke.

With almost overwhelming promotional force, the last-minute campaign is becoming so complete that you’ll be hard-pressed in the next few days to miss something hyping Cameron’s new film.
It’ll be in fast food restaurants, on TV, in travel contests, on soda cans, on cell phones and, of course, all over the internet — from YouTube to specially created corporate and viral sites. 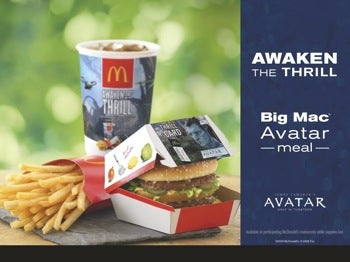 It would be an exaggeration to say “Avatar” is riding on the back of as many significant promotion partners as there are special effects in the film. But not much of one.
McDONALD’S
Speaking on a webcast from the U.K. Thursday, just before “Avatar’s” world premiere in London, Cameron said he hoped the “McDonald’s consumer is going to feel that they are part of the movie when they go into the restaurants.”
Having done promotional partnerships with Fox in the past on films such as “Night at the Museum” and “Ice Age 3,” McDonald’s seems to be going all out on “Avatar” starting this week.
“We’ve created the biggest ever digital promotion for McDonald’s,” Mary Dillon, McDonald’s global chief marketing officer, told TheWrap. “There are not that many entertainment opportunities that are global in nature, ‘Avatar’ is.”
Having already launched a Twitter sweepstakes contest, the fast-food company will be all “Avatar,” all the time until January, with a campaign that starts the day the movie opens.
In-restaurant packaging and promotions are just some of the "Avatar" enticements McDonald’s plans to roll out.
Among them: eight collectible “Thrillcards” that use an augmented-reality technology called McD Vision to take consumers into the movie’s alien world of Pandora; online game PandoraQuest; and the online interactive experience of PandoraRVR, which lets you "drive" through the alien world.
Both PandoraQuest and PandoraRVR are accessed via the McDonald’s website.
With most of its 32,000 stores in 100 countries around the globe participating, the company has already launched region-specific campaigns and advertising in Latin America, Asia, Australia and Europe. 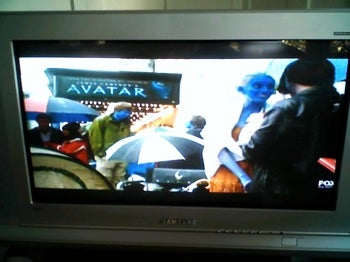 Neil Golden, McDonald’s U.S. chief marketing officer, told TheWrap there is a method to the apparent madness of the company’s effort. “Simple. We’re aligning with the movie break to take advantage of the excitement building around it. There are tactical opportunities to further energize our Big Mac brand. And we’re bringing to them more people to experience the movie outside the theater.”
FOX
You would expect a Fox film to be heavily promoted on News Corp. properties. But you might not have expected the “Avatar” subplot on this week’s Fox hit series “Bones.” The show prominently wove in an “Avatar” storyline that saw several characters — including intern Colin Fisher, played by Joel Moore, who is in “Avatar” — lining up to get tickets to the film’s opening day. (See photo at right.) Scenes from the movie appeared on screen, along with dialogue calling it "so much more than a movie.”
PANASONIC, CASIO
With a seamless approach, Osaka-based electronics giant Panasonic is binding together “Avatar” and the company’s bid for the 3D market. Everywhere Panasonics are — and if you are thinking of getting a new TV this holiday, that’s a lot of places – “Avatar” will be.
But it’s not just retail stores. Panasonic has a truck roaming parking lots like the Santa Monica Civic Auditorium’s using footage from the film — along with shots from the Beijing Olympics’ Opening Ceremonies and sports, including car racing – to hawk its 65-inch and 103-inch plasma monitors. (It should be noted that Cameron used Panasonic plasma while editing the film.)
Plus, Panasonic screens around the world will be running footage from “Avatar” for consumers in retailers and at trade and electronics industry conferences.
Meanwhile, in the U.K., Casio has rebranded its London flagship store with “Avatar,” and it’s offering a contest to win a trip to New Zealand, where much of the movie was shot.
COCA COLA
Coke has started an international “Avatar” campaign with Coke Zero. As displayed in a 30-second spot, the beverage company has printed AVTR on millions on augmented-reality cans that, when held up to a webcam, put the participant on the world of Pandora.
To foster the connection, a website has been set up by Coke and Fox with “news reports” from the alien world, as well as games and other applications.
MATTEL
Perfectly timed for that last-minute Christmas rush, Mattel has put out a line of “Avatar” action figures and vehicles that come with an i-Tag that also reveals augmented-reality content when held up to a webcam.
LG
The cellphone manufacturer has loaded the film’s trailer into its eXpo handset. It’s also just started running ads promoting both the handset and the film, and has created its own “Avatar” microsite with exclusive content. A Facebook page jointly sponsored by Fox, MTV and LG provides add-ons for the “Avatar” videogame. Plus, through a sponsorship with GameStop, LG is making available "Avatar" videogame add-ons for registered users.
THE SOUNDTRACK
Three days before the movie comes out, Atlantic Records will release the James Horner score. Rounding out the album — and to be released as a single with a video — is “I See You,” sung by Leona Lewis. The ballad, which plays under the closing credits in the film, was produced by Horner and Simon Frangle, who also were behind Celine Dion’s “My Heart Will Go On,” the best-selling single of 1998, from“Titanic.” It sounds just enough like it.
MORE "AVATAR"
‘Avatar’ Getting Killer Buzz
Cameron Plans 2 "Avatar" Sequels
‘Avatar’s’ True Cost — and Consequences
x
Looks like you're enjoying reading