The first screening audiences were crucial in turning the buzz on “Avatar” from questionable to enthusiastic. This weekend’s paying crowds were key to getting the expensive film off the ground commercially.

But when it comes to the Oscar race, the most critical audience that “Avatar” has yet faced was the one made up of the Academy members who came to the Samuel Goldwyn Theater on Sunday night for the official AMPAS members’ screening of the film.

And the reaction, I hear, was a triumph for Cameron’s film. First of all, it drew a capacity crowd to the 1,012-seat theater, something that has rarely happened in a season of surprisingly light attendance for the Goldwyn’s weekend screenings. 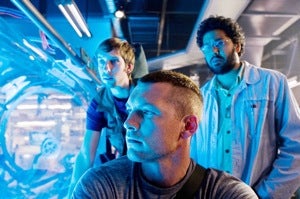 In fact, one member reports arriving half an hour early and still having to park six blocks away, the two official lots having filled up by then.

The crowd reportedly responded with enormous enthusiasm. Comments I’ve heard from those in attendance include “huge response,” “great applause at the end,” “no walk outs, not even bathroom trips,” and one simple conclusion: “It’ll win.”

Sure, I heard a few quibbles about the “juvenile story,” and I’ve been told of one viewer who walked out sniffing that “It’s Complicated” was a better film.

But for the most part, it was apparently the kind of screening that immediately puts “Avatar” in the first rank of Best Picture contenders … as if it wasn’t there already.

The film also picked up a fan in Oscar show co-producer Adam Shankman. On Sunday, he tweeted "Today I’m going to see nine and avatar, and as producer of the oscars, I really can’t comment much, but I’m very excited."

Monday morning, Shankman apparently decided that he could say something — and what he posted was wildly enthusiastic: "Avatar is not only brilliant, but has the most powerful environmental message of the year.  Amazing.  Game changer."

And by the way, the screen grab below is from the Internet Movie Database page for "Avatar."  I know that studios buy banner ads at the top of IMDb pages for their films, and ads along the side, and ads everywhere else — but has anybody ever bought the background of their entire page?

All the other top films have the usual white IMDb backgrounds.  But not "Avatar," which is once again boldly going where no film (that I know of, anyway) has gone before. 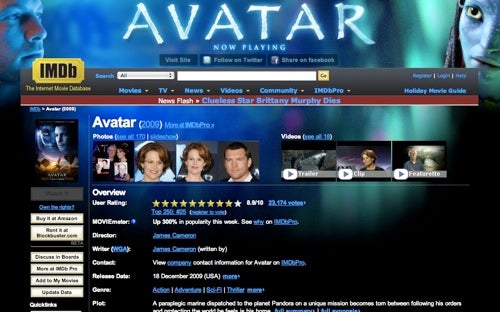