(Note: Major spoilers ahead for “Avengers: Endgame” and the future of the MCU)

Well, if you’ve seen “Avengers: Endgame,” then you know it’s one gut-punch moment after another. Bring tissues, people. But one moment at the very end of “Endgame” involving Falcon and another character hits particularly hard. You know the one we mean.

In comic books, retirement never lasts and death is often just a minor inconvenience. Characters die and come back to life so often the afterlife is practically a suburb of New York, and bouncing back from something as permanent as old age is a simple matter of finding the right magic potion.

But in a film franchise like the Marvel Cinematic Universe, if a character definitively leaves — especially if their actor is ready to move on to other roles — chances are that character is gonna stay gone. Which means that moment right at the end of “Endgame”? It unambiguously spells out the permanent exit of one of the series’ most beloved and prominent heroes.

But where the Marvel gods taketh away, they also giveth back — in abundance. Because “Endgame” also sets up that character’s replacement in a very cool way drawn straight from the comics.

MAJOR spoilers from here out. Seriously, stop reading if you don’t want to know.

In the final moments of “Avengers: Endgame,” Steve Rogers, AKA Captain America (Chris Evans), travels back in time to return the six Infinity Stones to the time periods from which the Avengers stole them during the amusing “time heist” in the film’s second act. Though his mission is supposed to last however long he needs, to his friends waiting for him in the present day he’s only supposed to be gone for a few seconds.

Except he never appears back inside the time machine. Instead, as Hulk (Mark Ruffalo), Bucky (Sebastian Stan) and Falcon, AKA Sam Wilson (Anthony Mackie) stand around confused, they notice something new: nearby, an old man is sitting on a park bench overlooking a serene lake. Yep, it’s Steve. It seems that after he returned the Infinity Stones, he decided to retire from superheroics, and went back in time to have the kind of life he always wanted before getting frozen in the ice at the end of “Captain America: The First Avenger.”

It’s a bit weird — see more about the film’s confusing time travel rules here — but basically Steve went back to the 1940s and then took the slow route back to the future, otherwise known as aging normal. And now, as a 100-something year old man, he returned to where he left his friends behind, for him all those years ago and for them a couple of minutes, to say goodbye.

But Cap also brought a gift — his original vibranium shield (please don’t ask how he saved it without changing the timeline, we don’t know) — and he gives it to Falcon.

And with that, it’s Sam’s shield now; yep, Falcon will be taking up the mantle of Captain America, and in a way almost exactly like he did in the comics. 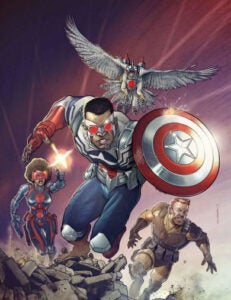 In 2014’s Captain America Vol 7 #21,” Cap lost his powers after the villain Iron Nail stabbed him with a dart that neutralized the super-soldier serum and caused Cap to rapidly turn into an old man, reflecting his actual chronological age. Though he was able to stop Iron Nail’s evil plan, he was almost killed, and was barely saved by his best pal Sam Wilson.

Four issues later, after learning he’s pretty much going to be stuck in his aged form, Steve accepts reality and names Sam the new Captain America.

Sam holds on the the Captain America moniker throughout the comics for a few years, even after Steve manages to get his super-soldier powers back. But he doesn’t just roll as a continuation of Steve’s approach to being Cap. For one thing, Sam adopts an extremely cool, personalized Captain America uniform that incorporates elements of his Falcon uniform.

Sam eventually stepped down as Captain America in 2017, after reaching a breaking point due to a combination of bad actions by the government (and an impostor, fascist Steve Rogers), and years of grief from right wingers who called him “Captain Socialism.” But in resigning and returning to his Falcon persona, he doubled-down on his personal ideals. 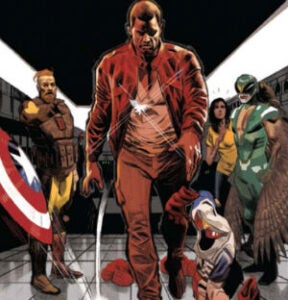 It remains to be seen how Sam will carry Steve’s legacy in the Marvel Cinematic Universe of course. For one thing, we have no idea if he’ll be in any future films. For another, as far as we know, MCU Sam hasn’t been given any super soldier serum to make him as resilient as Steve. And perhaps most importantly, the upcoming Disney+ series set in the MCU and starring Mackie and Stan is officially titled “Falcon and the Winter Soldier,” indicating at least whenever the show takes place, Sam Wilson is still going by his original nom de superheroism.

Then again, Sam isn’t the only person to fill in as Captain America after Steve Rogers. One notable person to wear the mantle is James Buchanan “Bucky” Barnes, better known as The Winter Soldier. He took over after the apparent death of Steve during the Marvel Comics version of “Civil War.”

Maybe their show could end up getting a name change — even if “Captain America and Captain America” is kind of a mouthful. Either way, here’s hoping we get Sam’s Falcon-infused version of Captain American sooner rather than later.