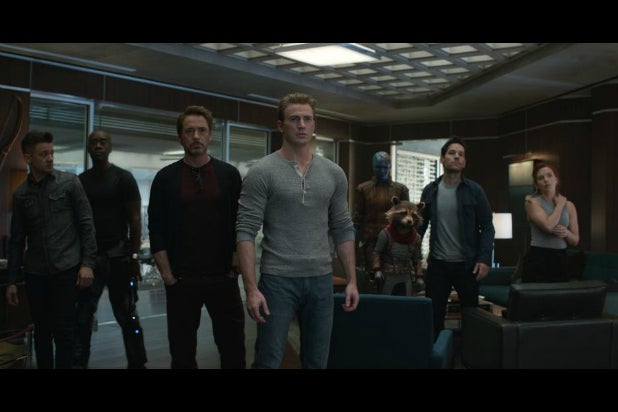 Some movies give us what we want, while others give us what we need. Claire Denis’ “High Life,” for instance, is an intense, tough viewing experience, but it offers important ideas about humanity’s future. “Avengers: Endgame” has almost nothing on its mind but crossing the Ts and dotting the Is of a far-flung superhero saga, but to anyone with even a minor emotional stake in the Marvel Cinematic Universe, it has all the fleeting satisfaction of a shot of whipped cream delivered directly from the spray can.

And that’s not a bad thing. You want an arthouse superhero movie, go see “Fast Color.” (And you should.) “Avengers: Endgame” is a popcorn epic, of the extra salt-and-butter variety.

Directors Joe and Anthony Russo were known mostly for TV before getting involved with the MCU, and they and screenwriters Christopher Markus and Stephen McFeely (both also Marvel-movie vets) have created a season finale writ large, one in which some major characters will take a final bow while others are placed into new roles or locations where we will find them in future installments.

The film’s structure also calls to mind the extended “annual” issues that superhero comics often publish, usually in the summer. For a team book like “The Avengers,” the annual would involve a stand-alone crisis, or one that’s been built up, requiring the entire team to gather together, split into teams to chase far-flung dangers, and then reunite for one big battle, often requiring a two-page splash panel to accommodate the many heroes and villains clashing into one another like opposing tidal waves.

The Russos give us that moment sometime in hour three of “Endgame,” and it’s a scene that will have internet fans parsing it out Zapruder-style with circles and annotations. And beyond the sheer adrenaline of that impending impact, seeing so many characters on screen reminds us that “Cinematic Universe” isn’t a term being thrown around willy-nilly; all these principal characters and pals and sidekicks and armies add up to an impressive mob of metahumans, and the film efficiently directs all this traffic.

Within that final battle comes a delectable 30-second-or-so sequence that seems intentionally crafted as an Infinity Gauntlet-sized middle finger to toxic fanboys, as we see Captain Marvel (Brie Larson), Valkyrie (Tessa Thompson) and another female character, and another, and another, all stepping up to take care of business. The MCU may have been slow to give us a film with a female headliner, but they’ve been building a deep bench of women characters all along, including several this time around who get to be more heroic than previous installments have allowed.

You may note that I’m not recounting the plot, because a) it matters perhaps too much to one segment of the audience, and b) it ultimately matters not at all. “Avengers: Endgame” isn’t about anything, really, except its own internal mythology and where it all goes from here. And knowing the realities of filmmaking and the needs of an ongoing franchise, most viewers will probably guess correctly which characters will have survived Thanos’ (Josh Brolin) deadly snap.

Also Read: The Russo Brothers on Balancing All the Characters in 'Avengers: Endgame': 'It's Not an Exact Science'

But if you enjoyed “Infinity War” because you are invested enough in these characters — and to their credit, these really are characters and not just pieces on a gameboard — to have enjoyed the interplay between people we never thought we’d see together, you’ll find that same delight here in reunions and partings, betrayals and sacrifices. There’s more than a whiff of World War II cinema here, with brave soldiers (of both genders) giving of themselves for the greater good alongside the sweethearts who will mourn them.

Cinematographer Trent Opaloch (“Chappie”) veers a little hard into ominous CGI weather patterns in the climactic sequence, but he also has fun with playing around with the various light and color schemes that have existed throughout the MCU series; if you didn’t sit through all of the previous movies to prep for this one, you’ll get a crash course in the various visual tones that this franchise has offered. And as always, Alan Silvestri’s score serves up that flutter-in-the-chest fanfare at just the right moments.

Yes, there are some moments when the lengthy running time makes itself known, and yes, this is a corporate product even more so than most of the stand-alone MCU movies. But if you like what that product is about, the laughs and tears here feel genuine. The Marvel movies are by no means over, but “Avengers: Endgame” does offer rare moments of catharsis in an ongoing serialized saga.