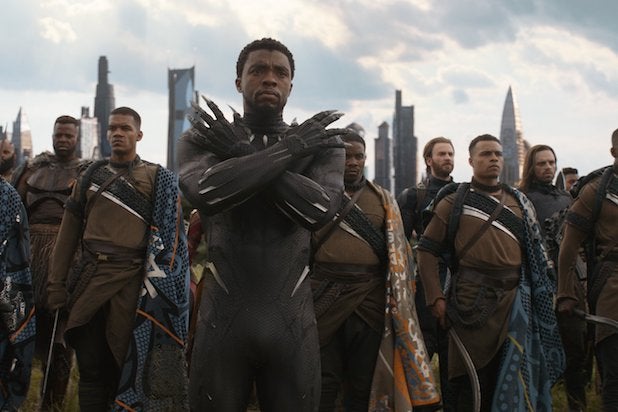 Analysts and distribution execs have pointed to many different factors when discussing the record-breaking box office success of “Avengers: Infinity War,” but all of them say that this past weekend’s big triumph for Marvel Studios is also a triumph for “Black Panther,” as Ryan Coogler’s cultural phenomenon served as a perfect lead-in to Marvel’s big crossover.

“You really couldn’t have set up a one-two punch any better,” said IMAX Entertainment CEO Greg Foster. “‘Black Panther’ was a film where audience interest peaked at the exact time it was being released, and that’s the goal you’re always trying to get with a big film.”

“And it created this rabid fanbase behind Black Panther and the other characters right at the time when promotion for ‘Infinity War’ was ramping up, and the team at Disney and Marvel Studios deserve all the credit in the world for cultivating that desire to see more of Wakanda.”

But when “Infinity War” was being written, no one had any idea that “Black Panther” would become the enormous hit that it became, even though the man behind the mask, T’Challa, made his introduction in “Captain America: Civil War.” There was even one point when “Black Panther” was to be released after “Infinity War.” But in October 2015, was moved back to its February release date to accommodate “Ant-Man and The Wasp.”

Regardless of when it was going to be released, development of “Infinity War” began well before anyone at Marvel Studios knew how “Black Panther” was going to be received. According to Marvel Studios President Kevin Feige, this is something they’re well used to. He notes that when Chris Hemsworth and Chris Evans — a.k.a. Thor and Captain America — began filming for “The Avengers” in 2011, the solo film debuts hadn’t even been released yet.

“We have a tradition of having all the chips on the table of going all in. That was the same thing here,” Feige told TheWrap ahead of the release of “Infinity War.”

“We believed in Panther, we believed in Chad. We knew audiences liked him from Civil War certainly, but we believe in the other Wakandans that you would meet and Wakanda as a location. So it was always the idea to incorporate that. Assume that audiences would have seen Black Panther, been familiar with it, want to see more of it, and include it in a big part, in a big way in Infinity War.”

It certainly was included in a big way, with Wakanda serving as the site of the film’s climax while T’Challa’s brilliant sister, Shuri, plays a crucial role in the Avengers’ desperate plan to stop Thanos. That footage of Wakanda became a prominent part of the promotion of “Infinity War,” with T’Challa’s order to “get this man a shield” becoming a highlight of the film’s trailer, while one of its most shared promotional images was of Black Panther and Okoye, the breakout heroine played by Danai Gurira, charging into battle alongside the other famous Marvel heroes.

“Marvel just has such a great understanding of what their audience loves,” said comScore  Paul Dergarabedian.”That they can introduce a new group of characters just three months before ‘Avengers’ and have them become just as big with audiences as the other heroes that they have seen for years shows just how big a success ‘Black Panther’ was.”