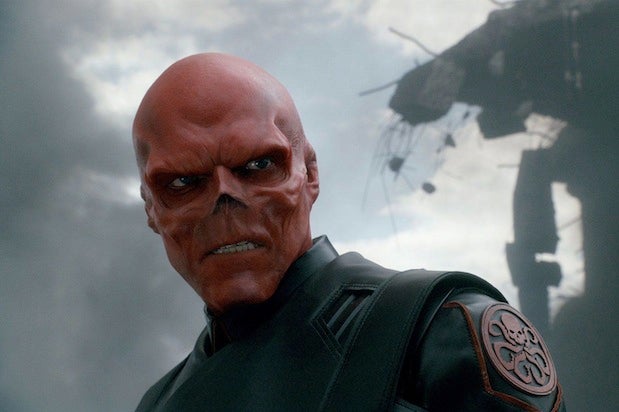 Spoilers for “Avengers: Infinity War” ahead. Don’t read if you haven’t seen it!

With that finger-snap at the end of “Avengers: Infinity War,” Thanos made the future extremely uncertain for a ton of Marvel Cinematic Universe heroes. But the movie’s directors have confirmed there’s at least one character for whom the Mad Titan’s gut-punch victory was extremely good news: Red Skull, whose surprise appearance was one of the film’s big twists.

On Twitter Friday night, “Infinity War” directors Joe and Anthony Russo fielded a fan question about Red Skull (Ross Marquand), and kind of implied we might be getting more of him in the future.

Just in case you didn’t see “Infinity War” but for some reason are still reading this: Late in the film Thanos (Josh Brolin) and Gamora (Zoe Saldana) head to a planet called Vormir to retrieve the Soul Stone. That’s one of the six all-powerful Infinity Stones Thanos needs to wipe out half of all life in the universe. Once there, they’re greeted by Red Skull, revealed to be the keeper of the Soul Stone.

Red Skull last appeared way back in 2011’s “Captain America: The First Avenger,” where he tried to use the powerful artifact called the Tesseract — later confirmed to be the Space Infinity Stone — to take over the world. That backfired horribly, with Red Skull seemingly killed when he was sucked through a spacetime portal at the end of the movie.

But it wasn’t clear exactly what happened to him until “Infinity War,” where it’s explained that as someone who tried to control an Infinity Stone, he was bound to another one — the Soul Stone. Or as he says, forced to guide others to something he can never possess himself.

Red Skull tells Thanos that he has to sacrifice something he loves to gain the Soul Stone. Thanos does so by killing Gamora, after which he wakes up at the bottom of the mountain where he found Red Skull, with the stone in hand. What happened to Red Skull, though, is never discussed.

But during their fan Q&A on Twitter, the Russos explained that with the Soul Stone in Thanos’ possession, Red Skull is no longer bound to Vormir and is free to leave. They also hinted at a possible future for Red Skull.

“Red Skull is free to leave Vormir, and he is also free to pursue his desire for an Infinity Stone,” the directors wrote.

Red Skull is free to leave Vormir, and he is also free to pursue his desire for an Infinity Stone. – Russo Brothers #InfinityWar #VuduViewingParty https://t.co/BoQCFbYPUv

Of course, that doesn’t mean that Red Skull is definitely showing up anytime soon, but like his not-quite-death in “Captain America,” the door is wide open for his return. Especially in light of something the “Infinity War” writers said in the audio commentary on the home video release.

The idea to make Red Skull the guide to the Soul Stone on Vormir served a purpose for the script, writers Stephen McFeely and Christopher Markus said. Butin addition it fulfilled a longtime wish for the pair, who also wrote all three “Captain America” movies. They said they had ‘a fetish’ for bringing the Red Skull back to the MCU, and Vormir gave them that opportunity.

As an added bonus, go back and rewatch “The First Avenger” to see for yourself how well Red Skull’s appearance in “Infinity War” is supported by his fate in the earlier film. But you’ll still have to wait until next April to see if he returns, again.

The home video release of “Avengers: Infinity War” has introduced a lot of new information about the state of the MCU. Here’s everything we learned from the “Infinity War” director commentary, including how “Black Panther” made the “Infinity War” filmmakers look smart. We also learned why Spider-Man lingered a bit after Thanos’ snap; that you don’t have to be “worthy” to wield Thor’s new “Stormbreaker” axe; why Thanos didn’t go after the stones years ago; and why Thanos didn’t just double the universe’s resources.