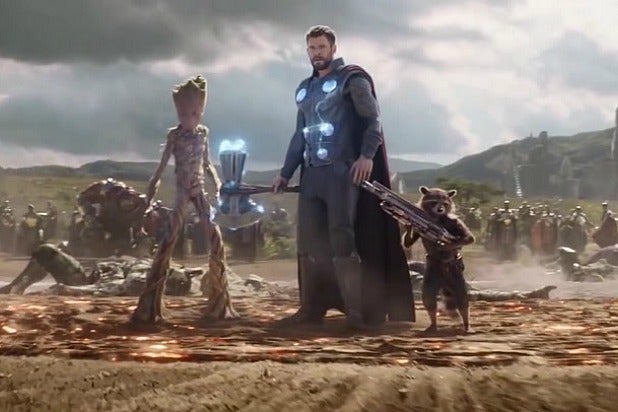 (Some relatively minor spoilers ahead for “Avengers: Infinity War.”)

“Avengers: Infinity War” is absolutely chock-full of fascinating new wrinkles in the Marvel Cinematic Universe, and few of those wrinkles are more interesting than Thor’s (Chris Hemsworth) new axe, Stormbreaker. The is not only a super powerful conduit of Thor’s thunderous abilities, but it can also summon the bifrost and thus let Thor go wherever he wants in the Nine Realms and beyond.

You’re probably tempted to think — as pretty much everyone did — that Stormbreaker has a rule similar to that of Thor’s hammer Mjolnir, which was destroyed by Hela (Cate Blanchett) back in “Thor: Ragnarok.” That rule being that only those who are worthy are able to hold it. In the MCU, only one character other than Thor demonstrated that worthiness — Vision (Paul Bettany), in “Avengers: Age of Ultron.”

If you assume that Stormbreaker also has that rule, then you would assume that means Groot (Vin Diesel) is also “worthy,” because he was able to lift Stormbreaker when he sacrificed his arm to make its handle. But you would be wrong, according to Joe and Anthony Russo, the directors of “Avengers: Infinity War.”

On Friday night, the Russos participated in the Vudu Viewing Party of the film, in which fans at home watched “Infinity War” at the same time and asked the Russos questions on Twitter using the #VuduViewingParty hashtag as they watched. And one fan asked, “So in the forge scene, Groot was able to lift Stormbreaker. Would that make Groot worthy along with Thor and Vision?”

Not so fast, the Russos said via the official @Avengers Twitter account. “Mjolnir requires worthiness, not Stormbreaker.”

That is a very interesting bit of information for a number of reasons. Stormbreaker does exist in the comics (as another hammer, not an axe), and while many fans have assumed it carries the test of worthiness like Mjolnir, that fact has never been confirmed or denied by the comics themselves.

This won’t settle that debate, because the MCU often has different rules from the comics, but the idea that anyone, good or evil, could theoretically use Stormbreaker could have some very interesting ramifications for the future.

But just because you don’t necessarily have to be “worthy” to hold Stormbreaker doesn’t mean that it would be easy for any random Joe to use it. As Thor claimed ominously in “Infinity War,” the weapons of Nidavellir have side effects for those who “lack the strength to wield them.”

“Your bodies would crumble as your minds collapse into madness,” Thor tells the Guardians of the Galaxy before he, Rocket (Bradley Cooper) and Groot head to Nidavellir early on in the movie.

So without the test of worthiness, I can’t help but think we’re gonna get to see exactly what that looks like somewhere down the line in the MCU. Get hype!