Okay, that’s not entirely accurate. A few films are still screening in Los Angeles and New York – but not many, particularly not in New York.

And in Los Angeles, meanwhile, most of the action is coming from a single studio, the Weinstein Company, which is four-walling the Malibu Cinema, the Music Hall and Harmony Gold for the next week, running constant screenings of its four contenders, “Nine,” “Inglourious Basterds,” “A Single Man” and “The Road.”

Otherwise, voters can look at it as a couple of weeks off, as time to work through that stack of screeners while on vacation …

… unless that vacation happens to take them to, say, Aspen or Hawaii, where they’ll find that the screening game has followed them. 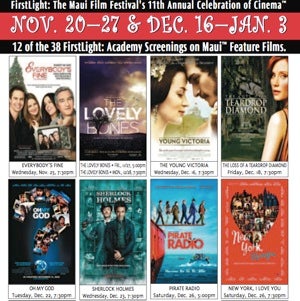 It’s been a tradition for years, holiday screenings of Oscar contenders in locations that just might be getting an influx of movie-industry vacationers. A couple of years ago, seeing that Paramount had suddenly scheduled screenings of a couple of its big awards movies for the island of Maui, I asked Academy executive director Bruce Davis exactly how many AMPAS members happened to be living on that island.

“We only list three members as living in Maui,” he said. “So either the studio has a lot more information than I do about people’s holiday vacation plans, or those three voters are in for a full-court press.”

Those Maui voters, and Hollywood guild vacationers, are in luck again this year, as the annual “Firstlight Academy Screenings” series is once again in full swing at the Castle Theater on Maui. (A portion of the flyer is pictured, left.)

This weekend’s offerings include “Coraline,” “Precious,” “A Single Man,” “Inglourious Basterds,” “The Lovely Bones” and “Where the Wild Things Are.”

If voters hang around until New Years, there’s another batch: “Fantastic Mr. Fox,” “Crazy Heart,” “Bright Star” and others.

This in addition to Thanksgiving-week screenings of “Bright Star,” “Precious,” “The Road,” “The Messenger” and others.

Near the slopes in Colorado, meanwhile, Aspen Film is doing its own “Academy Screenings,” with two films a day through the holidays. “Nine” screens Wednesday evening, “The Messenger” and “The Last Station” on Christmas day, “Bright Star” and “The Lovely Bones” on Saturday, all the way through “The Hurt Locker” and “Crazy Heart” on January 2.

Unlike some Academy and guild screenings in L.A. and New York, these are also open to paying members of the public; otherwise, the theaters would be largely empty. But I’ve been told that most screenings get at least a few AMPAS or guild members, who are admitted free of charge.

Eventually, of course, everybody has to come back to town and get back to work. Whereupon the New York and L.A. screening rooms will get back to their round-the-clock bookings, and the offerings won’t be quite as impressive in Aspen or on Maui.