It didn’t take long for the post-Golden Globes dust to settle, as the weekend that followed (Jan. 11 and 12) brought more chances for Hollywood’s Oscar hopefuls to scoop up a few more trophies.

Surprisingly, there were a lot of nerves on display, too, even at the AARP The Magazine’s 19th Annual Movies for Grownups Awards, where most of the honorees were pretty sure they were winners. That gala designed for the over-50 crowd airs tonight on “Great Performances” at 6/5c on PBS, after actually happening on Jan. 11.

Annette Bening was honored with a career achievement prize, as her husband Warren Beatty cheered her on, and Tony Danza acted as a lively and funny host for the evening. 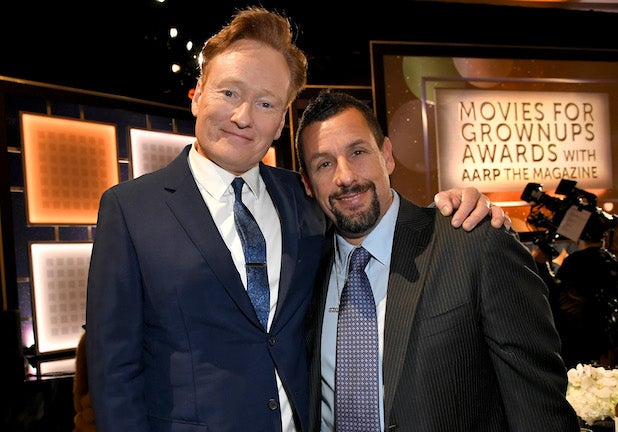 Best Actor honoree Adam Sandler arrived early to the Beverly Wilshire Hotel, where he and his wife sat with Pedro Almodovar and joined the rest of the star-packed ballroom in dining on caprese salad and filet mignon. But his nervousness showed as the night went on. “I’m not used to this, being in the same room with people like De Niro,” he told TheWrap. “And I’m even more nervous about the Critics Choice Awards tomorrow night.” He was the poster boy for restless leg syndrome, especially when his buddy Conan O’Brien showed up a bit late, but in time to present Sandler for his prize for his work in “Uncut Gems.”

“Sit down!” O’Brien bellowed at Sandler, as he jumped the gun and ran toward the stage before they even showed his acting clips. Lots of shouting and ribbing went on, but when Sandler finally accepted his AARP award, he was humble. “I’m just a comedian who can’t act,” the 53-year-old insisted.

A few of the winners happened to reach age 50 in 2019, with “Marriage Story” writer-director Noah Baumbach leading the pack. Accepting his award for Best Screenwriter, he joked that, “I thank the AARP for letting me into the club finally. I’ve been trying to get in for years.” He couldn’t help making a more ironic joke about his drama that centers on a divorce that seems to strike very close to his own experience, saying, “I want to thank all of our divorced parents – Adam’s (Driver) parents, Scarlett’s (Johansson) divorced parents, Laura’s (Dern) divorced parents, my divorced parents, our step-parents and all of our ex-husbands and ex-wives.” 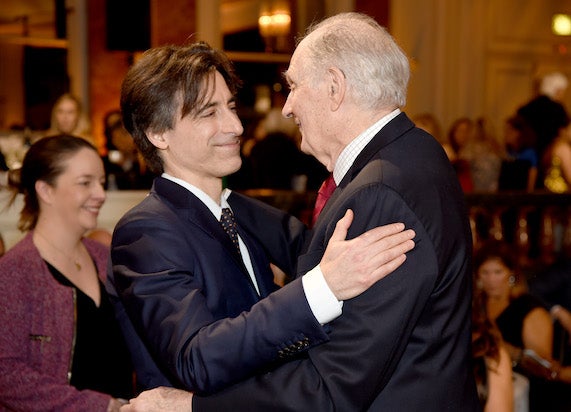 And Best Actress winner Renée Zellweger embraced the big 5-0 as well, telling the audience that included other award winners like Best Picture and Best Director Martin Scorsese (“The Irishman”) along with his stars Robert De Niro and Harvey Keitel, Best Supporting Actress Laura Dern (“Marriage Story”) and Kasi Lemmons (“Harriet”) that “I’m 50 now, and I’m kinda likin’ it! I don’t feel like we’re getting older; I feel like we’re winning.”

There were winners galore the next night, too, as the Critics Choice Awards took over the Barker Hangar in Santa Monica, airing live on the CW as the group presented their 25th annual prizes for the best in both film and television in 2019. The organization is 400 strong these days (it began with 40 film reviewers back in the day) and is traditionally a strong barometer of Oscar’s choices.

Zellweger triumphed yet again at the CCA’s, but while Sandler brought his nerves to the show, it was Joaquin Phoenix who took home the Best Actor crystal statue. Phoenix was the one who got the CCA to go to a plant-based meal, personally reaching out to Joey Berlin, the org’s founder and president to make the symbolic environmental shift.

Seth Meyers, who presented the Best Supporting Actress award to Laura Dern, wasn’t so impressed with the food supplied by Kahala Brands (The Counter, Baja Fresh, Pinkberry and Cold Stone Creamery). “Did we enjoy our vegan meal?” he asked with a guffaw. “Good thing the food critics aren’t here tonight!” 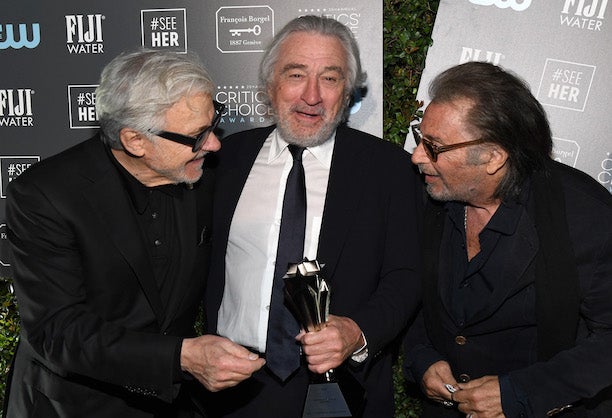 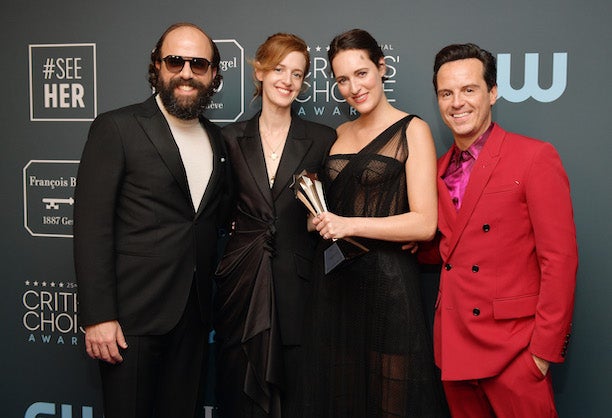 Eddie Murphy took home a lifetime achievement award; TV favorite “Fleabag” kept up its system of winning every prize its nominated for; and the surprises of the night were twofold. First, Sam Mendes (“1917”) and Bong Joon-ho (“Parasite”) tied for Best Director — only the tie was a surprise, as both movies were acknowledged frontrunners. The biggest surprise came as Quentin Tarantino scooped up the Best Picture prize for “Once Upon a Time… in Hollywood,” and sending up gasps and cheers from the assemblage of Hollywood’s best. 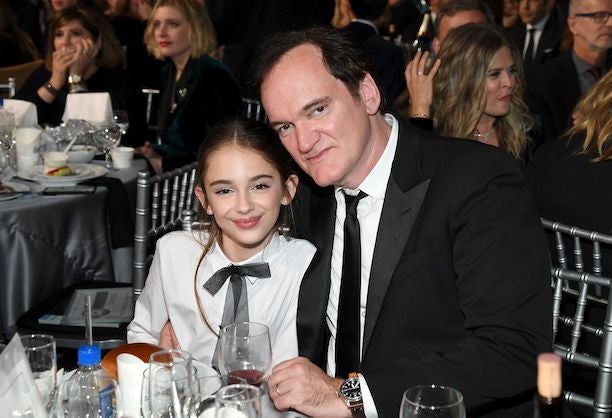 And as Monday dawned with the Academy Awards nominations announced, The Critics Choice Association once again proved its prescience, as all nine Best Picture Oscar nominees mirrored the same nine nominated by the CCA. Does that mean that “Once Upon a Time” will triumph on Feb. 9?

“This year is anyone’s guess,” Joey Berlin said bemusedly, as the show wrapped up last Sunday. “This is a great year for movies.”