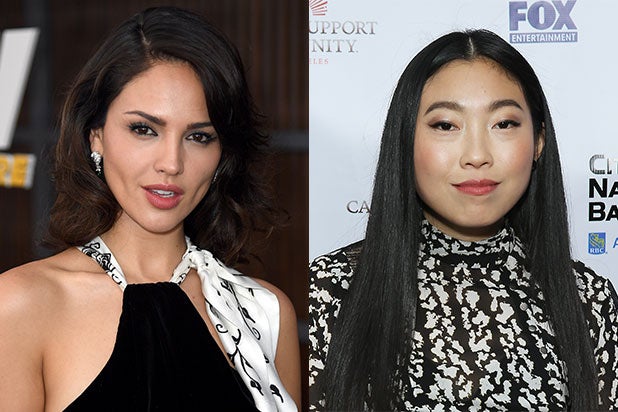 Alice Waddington’s “Paradise Hills” is about an island where women get sent to get reformed, and stars Awkwafina and Eiza González think that the entire fantastical movie comments about values society places on women — which is why it’s important for young women to see the film.

“It really was a movie that I think should speak to younger women, you know, and I think that it is in many ways a giant metaphor,” Awkwafina, (born Nora Lum) told TheWrap. “I think that sometimes, we’re conditioned to think that our real selves aren’t good enough and that we need to change ourselves to fit in… I think it’s really important for young women to understand that — that society is always going to put certain pressures on us, but at the same time we’re ourselves, we’re strong, we’re together. I think that’s what [the film] really meant for me.”

González agreed, pointing to the issues the film deals with. “I loved the script, it was smart, and it was different, and it was a movie I would’ve liked to watch when I was a younger girl. It talks about real issues: about body shaming, society’s pressure of looking a certain way. It also deals with this side of perfection that we have embedded as women from the moment we’re born. It talks about human sexuality, anxiety, dieting, body types, oppressiveness, fear, indecisiveness of who you want to be and social economics. I thought it was a very subtle but beautifully-written movie.”

González plays Amarna, a Mexican pop star who is sent to the island to learn to be more in line with what her managers want, and to also learn who she is as she confronts her sexuality. Of course, González, aside from her acting career, also has a few music albums under her belt.

“Amarna really resonated with me because I grew up in the public eye in Mexico and I was defining who I was as a human being at the time,” González said about her character. “I was going through my fair share of insecurities, feeling myself, not feeling myself, and discovering who I was. I think that’s why I wanted to play her: She was an oath to the younger version of me when I was a pop star and had to be the perfect version of who I was when I was dealing with so many insecurities. And I want girls to know that even on that side, even when you’re in the public eye, we are all going through struggles all the time, it doesn’t matter what age you are.’

Awkwafina wanted to be a part of the movie because she loved the overall message and the uniqueness of the world Waddington had created. She plays Yu, young musician who needs to be refined because she is going to live with her wealthy relatives in mainland China. At the school, she just wants to be left alone.

“I think she represented someone who was very tormented as a result of being rejected by her own family and as a result, I think, turns to this kind of explosive anger and kind of has to shut out the part of her that is kind and that cares for people and in doing so, she loses herself,” Awkwafina explained. “But then I think that, you know, towards the end she comes to her senses a little bit but I think she’s someone who really feels thrown away.”

“Paradise Hills” is about Uma (Roberts) who wakes up on an island called Paradise, where women get taught how to be proper. It’s run by the Duchess (Milla Jovovich), and the institute prides itself on teaching women the ideals of being a female. However, nothing is as it seems and below the beautiful facade, something sinister lurks. Emma Roberts’s character is sent to the school to prepare her to marry someone she isn’t keen on. Danielle Macdonald’s character is being forced to slim down.  The film had its premiere at the 2019 Sundance Film Festival.

Also Read: 'Paradise Hills' Director Alice Waddington on What She Hopes Young Women Will Learn From the Film (Video)

Another draw to the project for González was the amazing cast that had already joined, with whom she’s formed wonderful friendships, and she said she also wanted to be part of “Paradise Hills” because she wanted to work with a Latina director.

“I wanted to work a female, Spanish-speaking director,” González said. “As an actress and having the chance of being on this side of Hollywood, I really have to support my women and support my people and there are so many good, talented directors in Latin America and Spain that it’s hard for me not to do it.”

At Sundance, TheWrap spoke to Waddington, who said that she wants to show women of all ages that they don’t need to transform themselves into what society expects of them.

“It essentially communicates how we are asked to change all the time for others and how we are supposed to completely transform ourselves in order to fit into a society that doesn’t like us as who we are a lot of times,” she said. “And I think it’s really important to bring home this message to young girls and young women — that you really don’t have to change for anybody else that isn’t you and what you really have to do is find people who love you for you and stay true to yourself.”

“Paradise Hills” will hit theaters on Friday and will be released on demand on Nov. 1.