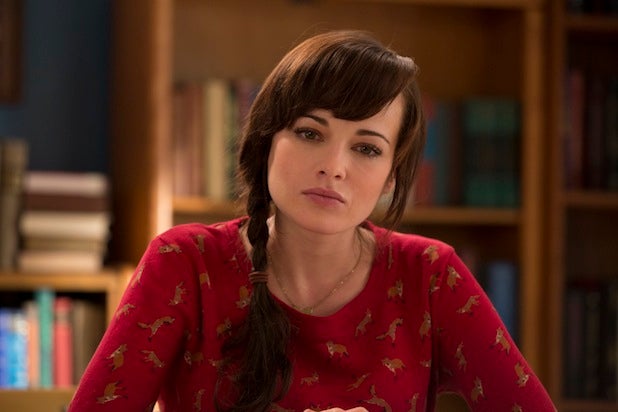 The second half of MTV’s third season of “Awkward” is moving at breakneck speed when it comes to its changing relationships.

Rickards’ character, Jenna, has broken up with long-time obsession, Matty (Beau Mirchoff), and jumped right into a new relationship with the guy she was cheating with, Collin (Nolan Gerard Funk).

It has estranged her from her close friends and Matty didn’t wait long before rebounding himself with Devon (Jessica Cook).

TheWrap: How are the viewers dealing with Jenna’s decision?
Ashley Rickard: Our fans know Jenna for three years before this. They know that deep down Jenna is not a bitch. She’s not evil. She’s just making mistakes that everybody makes.

What will be Jenna’s biggest lesson this season?
She definitely will need to learn about individuality and one’s truth and that one’s self-worth isn’t defined by other people. There’s always an understanding of yourself needed before you can start or stop something. You have to love yourself first.

How far will Jenna’s fight with her friends get?
It gets very brutal. They’re the people you trust and you’ve betrayed them and you feel they’ve betrayed you. It gets pretty vile. Sometimes, you make up but other times you go your separate ways. The best thing about Season 3 is that you get a lot more “B” storylines. I’m so happy for Jillian [Rose Reed], Jessica [Lu] and Molly [Tarlov], because they have such great storylines to play this season. They’re brilliant. And when viewers get to know them better individually, it does create some uncertainty as to where everyone will end up. That’s all I can say without giving it away.

How does Jenna handle her first meeting with Matty’s new girl, Devon?
I’ll answer that question with a story. I met her in the makeup trailer and I thought, “Damn, she’s pretty. I hate her.” And then, when I ended up talking to her she was so nice. So when I did the scene, I ended up drawing on that. I’m very territorial with the boys. They’re like my brothers. And I feel a little weird bringing another girl into the mix. She’s gorgeous, she’s hilarious, so of course I was a little jealous. It’s very similar to the scene in which Jenna meets Devon for the first time.

How do you feel about creator Lauren Iungerich leaving the show?
Lauren’s an incredibly gifted writer with a lot of imagination. The show was her baby from Day 1. It’s sad to see her go, but I’m excited I have the experience of working with her. I’ll take that on to the next job and the job after that.

What do you think of the new showrunners?
We met for dinner and then left like five hours later. We maybe talked for like a half-hour about the show. I’ve never really been in the loop on this show. There’s something about it where people like to surprise me with the writing. But, I have a lunch with them coming up and I will try to get as much info as I can. They’re really great. They’re really open to suggestions and I guess I’m open to collaborate.