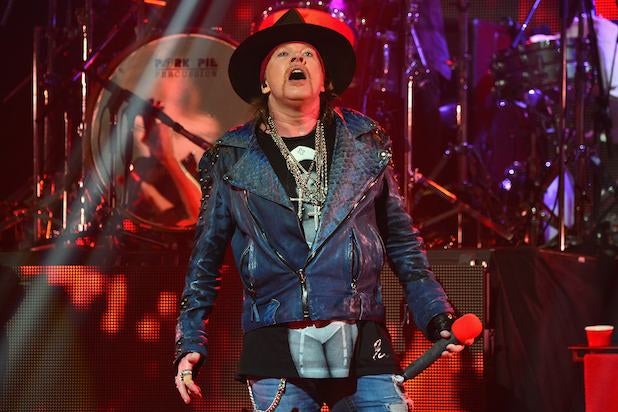 A debate is raging on the internet as to whether or not Guns N’ Roses frontman Axl Rose is the greatest singer of all time in response to an infographic that many believe declared him as such — but relax people, you just don’t read good.

The Concert Hotels chart titled “The Vocal Ranges of the World’s Greatest Singers” does not declare Axl Rose to be “the greatest.” He is simply among the dozens of artists the chart deemed “the world’s greatest singers,” and happens to sit at the top of the chart when sorted by “vocal range,” of which he supposedly has the largest.

However, sort by “highest notes,” and the rock star is beaten out by Mariah Carey, Christina Aguilera and Prince.

Outlets including USA Today, Death and Taxes, and Loudwire (and plenty of others interested in disputing the non-existent conclusion) have assumed the chart names Rose “the greatest” of all time, but the chart itself does not support any such conclusion.

“Compare the vocal ranges of today’s top artists with the greatest of all time,” the introduction to the infographic reads. “This chart shows the highest and lowest notes each artist hit in the recording studio. Hover over the bars to see the songs on which they reached those notes.”

The greatest of all time — which also include Freddie Mercury, Paul McCartney, Bruce Springsteen and Tina Turner — were selected from a 2008 Rolling Stone list, “100 Greatest Singers of All Time.” Their vocal range may not match Rose’s ability to go high and low (if that conclusion is even accurate), but they’re still all great in their own right.

Words accompanying the infographic easily reveal Rose is merely ONE OF the greatest, but naturally, people would rather read a headline than a short paragraph from the source material in question.

Here’s a small sample of the outrage — and confusion — brewing:

Axl Rose ranked as the greatest vocalist ever by the Society of People Who Don’t Know What They’re Talking About and Make Ridiculous Claims.

Axl Rose ranked best vocalist ever. Panel consisted of Rose and my cousin Randy, who thinks appetite for destruction is the best album ever.

Axl Rose has been named Greatest Singer of ALL TIME. The poll focused on vocal range & he beat the likes of Mariah Carey & Freddie Mercury!