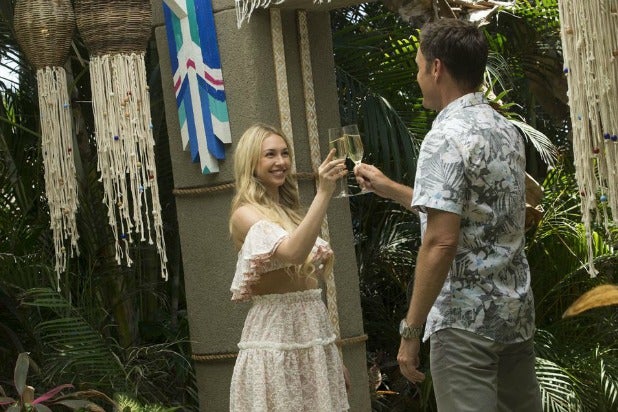 The returning “Bachelor in Paradise” cast members had a lot to say on Tuesday’s episode about the scandal surrounding an incident between Corinne Olympios and DeMario Jackson. Similarly, fans had a lot to say about these reactions.

During the second part of the Season 4 premiere, Chris Harrison and the cast reconvened following Warner Bros.’ decision to resume filming. The production had briefly shut down due to allegations of misconduct related to Olympios and Jackson’s sexual encounter.

ABC has opted not to air footage of the incident in question, and no specifics were shared about what actually happened between the two cast members, who did not return.

Instead, the episode featured Harrison asking the cast if they agreed with Warner Bros.’ call to resume production, and everyone did. Raven Gates said that nothing “bad” happened between Olympios and Jackson, and that she hopes the scandal doesn’t deter “actual victims” from speaking out.

The conversation also included a debate on whether race was a factor and whether those who supported Jackson were implicitly “slut-shaming” Olympios.

“You can practically see the cast reading the ‘ABC isn’t liable’ cue cards the lawyers are holding up behind the cameras,” one user wrote.

“They literally discussed everything BUT what happened between Corinne and DeMario,” another viewer tweeted.

Check out an array of messages below.

You can practically see the cast reading the "ABC isn't liable" cue cards the lawyers are holding up behind the cameras. #BachelorInParadise

Did the whole cast just call Corinne a liar and a racist? #bachlorinparadise pic.twitter.com/6lWYDmpJl9

Chris Harrison: "Do you think race had anything to do with this?" #BachelorInParadise
All the white cast members: pic.twitter.com/oAa8PvONFp

When #BachelorInParadise wastes 30 mins of my time trying to convince me their show is real and isn't scripted pic.twitter.com/FRt7NGpRDt

the #BachelorInParadise cast couldn't have handled corinne's assault any worse. they should all be ashamed

Realist convo I've ever heard on #BachelorInParadise. Props to Raven for touching on some serious points about sexual assault & slut shaming

Least important thing tonight, but #BachelorInParadise just had a really great open convo about slut-shaming and consent, color me stunned

“Bachelor in Paradise” airs Mondays at 8 p.m. ET on ABC.