As “Bachelor in Paradise” couples evaluated the strength of their relationships as their time on the beach winds down, Genevieve and Aaron’s romance fell through the cracks in an unexpected breakup that left Genevieve “very shocked.”

“Paradise is really made to be a very cohesive environment for people to come together,” Aaron told TheWrap, adding that the cast members don’t have to worry about practical elements like cooking, bills or childcare. “You should be able to make something work, and since we couldn’t communicate there — I’m gonna take as much of that onto me as possible because I was at fault a lot — I just thought we weren’t right for each other.”

The couple has been through their fair share this season, with miscommunications — like their memorable fight about the definition of “pain” and “itching” — pushing the pair to their breaking point as Genevieve packed her things in preparation to exit the beach before Aaron persuaded her to stay.

Though Aaron brought up these concerns to Genevieve in a conversation on Monday’s episode — which Aaron notes was much longer than it seemed on the show — Genevieve admits she was “taken aback” by the break up and wasn’t able to compose her thoughts in the moment, prompting a second discussion between the pair. 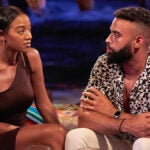 Also Read:
‘Bachelor in Paradise': Eliza Reveals Whether She Would Be Open to Trying Things With Justin Again

“I didn’t know what to say in that moment because I was just so taken aback,” Genevieve told TheWrap. “The night before rose ceremony he said he sees potential, he’s hard to deal with and he loves me, so I was not expecting it and I didn’t know how to react.”

After their first conversation, Genevieve discussed the situation with her friends and eventually decided to confront Aaron again.

“I was like, ‘why did I just let that happen?'” she continued. “I went back down there and just wanted to tell him the reason that I kept trying to leave was because of how you were treating me and … it wasn’t a good conversation but I am glad that I did go back and say that.

Despite their differences, the pair agreed on Tuesday’s finale that they were better off as friends, and Genevieve hopes it stays that way.

“I think he’s a good person,” she said. “He has a good heart [and] I hope the best for him … I’d love to be just friends and [be able to] casually hang with everyone.”