Colton Underwood was spurred to come out after being blackmailed with nude photos, the former “Bachelor” star told Variety.

“I, at one point, during my rock bottom and spiral, was getting blackmailed. Nobody knows I was blackmailed,” he said in a cover story released Wednesday. According to the story, Underwood “secretly visited a spa known for catering to gay clientele” in Los Angeles and was contacted via an anonymous email by someone threatening to out him.

After confiding in his publicist, Underwood made the decision to come out publicly in a “Good Morning America” interview last month. 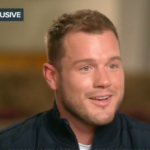 At the time, Underwood, who starred on the 23rd season of the hit ABC dating show in 2019, cited the turmoil of the past year when describing what moved him to come out, mentioning the global pandemic as well as his own well-documented personal struggles.

In the Variety interview, Underwood also addressed the allegations of stalking and harassment brought by his ex-girlfriend Cassie Randolph when she filed for a restraining order last year. (She later had the restraining order dropped.)

“Controlling situations to try to grasp at any part of the straight fantasy that I was trying to live out was so wrong,” he said, adding that he no longer wants to speak publicly about the situation because “it’s not fair for her to have her name in articles every time I talk.”