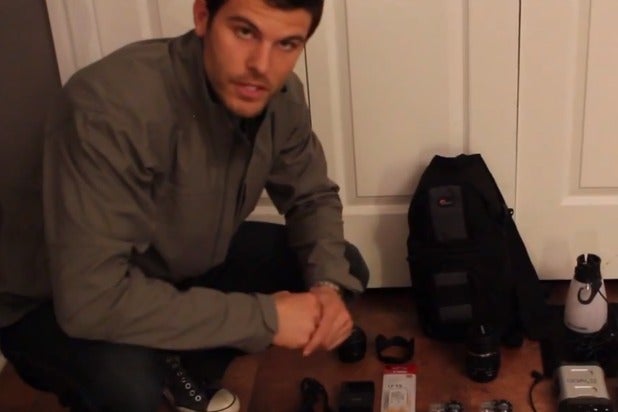 Eric Hill, a 32-year-old contestant on the upcoming season of ABC’s “The Bachelorette,” died in a paragliding accident over the weekend.

“On behalf of all of us at ‘The Bachelor,’ our thoughts and prayers go out to the family of Eric Hill. He will be missed,” tweeted Chris Harrison, host of “The Bachelor” and “The Bachelorette.”

“We are deeply saddened to hear about the tragic passing of our friend, Eric Hill. Eric inspired us every day with his passion, his courage and his adventurous spirit, and for that we are very thankful,” the show’s producers said in a statement. “On behalf of our cast, crew and producers, we send our love, our thoughts and our prayers to Eric’s family during this difficult time.”

Hill was attempting to travel to every country in the world as part of an expedition called “Go With Eric: The Global Odyssey.” (In the picture above, he displays his supplies.) On Wednesday, his supporters remembered him in a Facebook post urging people to “Live Like Eric”:

“Eric’s odyssey on Earth has come to an end. He was surrounded by his closest friends and more importantly his family before moving on,” the message said. “Eric leaves behind a legacy. He leaves inspiration. When he wanted something, he went and got it. He opened his mouth and made things happen. The reason his journey was so successful was because he had the courage to ask, and the guts to try! Eric took very calculated risks, he was never reckless.

“At this time, we know that Eric is not resting in peace. In fact, I never saw him rest once. Not even on the top of Kilimanjaro! It wasn’t his style! Wherever he is now, and whatever he’s doing, he’s doing it big! So the legacy he leaves behind? #LIVElikeEric.”

TheWrap has reached out to his website, and has not yet received a response.

“The reports from the witnesses were that he was 10 to 15 feet off the ground and experienced a partial parachute collapse. It swung him into the hillside, in their words, like a pendulum,” Anderton said. “He hit the hillside with quite a bit of force.”

The victim was taken by helicopter to a hospital, where he died.

Anderton said the area of the Salt Lake Valley where the accident occurred, about 15 miles from downtown Salt Lake City, is popular with paragliders and has several similar accidents each year.

He said confidentiality laws prevented him from disclosing the victim’s name, but said he believed his friends at the scene may have disclosed it to Utah news media. Anderton said he only learned of the “Bachelorette” connection when he began receiving calls from reporters.