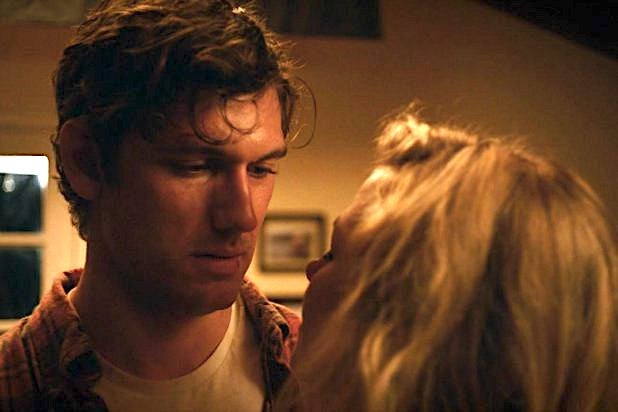 The dysfunctional family plot of “Back Roads,” which marks the directorial debut of actor Alex Pettyfer, is so twisted that every 10 minutes or so there is a new revelation meant to shock the audience, and this presumably goes back to Tawni O’Dell’s novel, on which the film is based.

The way this story is told also might have something to do with the participation of Adrian Lyne, who co-wrote the script with O’Dell. This is Lyne’s first film credit since the drama “Unfaithful” in 2002, and the particular emphasis on sex feels like it is his handiwork, so to speak.

Pettyfer also stars as Harley, a young man who has had to take responsibility for raising his three sisters after his mother (Juliette Lewis) was put in jail for murdering their father. This information is relayed to us in a slightly awkward title card at the beginning of the film. We then see Harley in a police station answering questions about having murdered an older woman with whom he had been having an affair.

This plot information is given to us early, and in many other films, these would be the only two points that needed to be dramatized or illuminated in some way. But the story of “Back Roads” is so full of secrets that these seeming giveaways at the beginning are only gestures towards the real, sick truth.

Harley works at a grocery store where there is a persistent buzz from the overhead fluorescent lights. He seems to be sleepwalking through his life and giving out the bare minimum for personal interaction, and there are reasons for that beyond his desperate situation. Pettyfer hews closely to his shut-down conception of his character, and he allows his cinematographer Jarin Blaschke (“The Witch”) to set up some very atmospheric shots of the family home. (These images are aided at key moments by a moody score from John Hunter.)

Harley’s sister Amber (Nicola Peltz, “Bates Motel”) is out-of-control sexually, and she taunts her brother regularly and cruelly. Amber is clearly acting out in a way that is meant to be protective, but we don’t learn the full extent of her problems until much later in the film. Harley’s younger sister Misty (Chiara Aurelia, “Gerald’s Game”) seems disturbed herself, but in a secretive way that is very different from Amber’s dramatics. The youngest sister Jody (Hala Finley, “Man With a Plan”) can never understand what is going on with her family.

Harley finds himself attracted to the married and neglected Callie (Jennifer Morrison) when she visits the grocery store, and they start an affair slowly and grimly, though not without a certain deadpan humor at times. They first make love in a sandpit when Harley is drunk, and he keeps recklessly upping the ante on their sex life even when he knows her husband is home.

Harley is seeing a social worker named Betty (June Carryl), and as he talks to her, we begin to find out some of the causes of the strange behavior we see at home with Harley and his sisters. Their father used to beat them, but he didn’t beat their mother. It would be spoiler-heavy to go any further with what we learn as this movie goes on, but suffice it to say that there were lots of forbidden entanglements in this particular back roads home.

“Back Roads” is engrossing, and Pettyfer deserves credit for both holding the movie together with his performance and controlling the tone of it as a director. Given the outlandishness of the material here, it would have been easy to start getting unwanted laughs in the second half of the film, but Pettyfer and his actors find the truth in it, even in a very long and demanding take where Harley confronts his mother in prison.

The writing in the two prison scenes that Pettyfer shares with Lewis has a slightly odd flavor sometimes, as if there are lines of dialogue missing, but that begins to make sense because these are two people who have to circle around the things they need to say to each other, and Lewis has to play the action of desperately not wanting to say anything to Pettyfer’s Harley.

This lack of honesty from Harley’s mother is made up for by the intense engagement that Carryl’s Betty brings to her last scene with Harley. Carryl suddenly reveals how deeply invested Betty is with Harley, and she really sells the idea that Betty has obsessively been thinking about trying to be his savior. It’s a measure of how tough “Back Roads” is that it finally views Betty’s emotion from something of a distance visually.

This is an accomplished debut from Pettyfer as a director. It shows how interested he seems to be in the scarier byways of life, which seemed clear in his performance last year in “The Strange Ones,” a very disturbing and neglected movie about child abuse that seems now like a companion piece to “Back Roads,” a film that stares unflinchingly at some of the rougher human experiences.