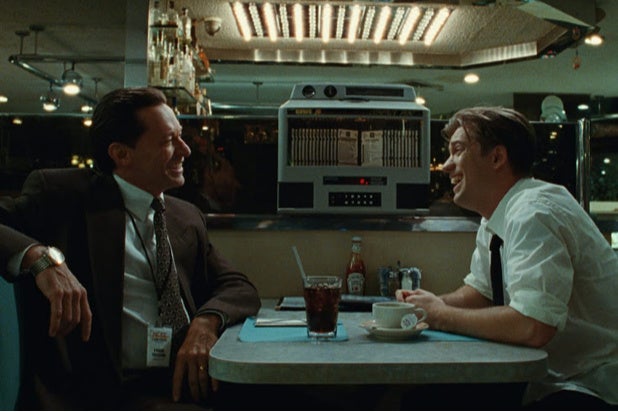 (Spoilers ahead for the HBO film “Bad Education” starring Hugh Jackman. Yes, the film is based on a true story, but technically there can be spoilers if the thing we’re going to discuss here is fictionalized)

It’s not super fun to think about real life these days, what with all the bad things going on out there. But even so, “Bad Education” on HBO is a pretty solid piece of quarantine entertainment, as it’s so fully zoomed in on the true story it tells — eschewing anything in the way of depressing early Aughts context.

So “Bad Education”  tells the story of Frank Tassone (Hugh Jackman), a charming school superintendent in the Roslyn school district on Long Island, New York, who went to prison a decade and a half ago for embezzling millions of dollars of school funds. Tassone didn’t go down alone, of course — assistant superintendent Pam Gluckin (played here by Allison Janney) actually stole more money than Tassone did.

It’s a compelling narrative for a movie, and HBO’s rendition of those events skews closer to the true story than most based-on-a-true-story films do. That should certainly come as no surprise once you realize that “Bad Education” was written by Mike Makowsky, who was a student at the Roslyn middle school at the time of the scandal.

As the story goes, Tassone and Gluckin had been embezzling funds to support fairly extravagant lifestyles. Gluckin, for example, had three homes, including one in Florida, and drove a Jaguar. Tassone spent the money he stole in his own variety of frivolous ways, like cosmetic surgeries and expensive suits — not to mention tens of thousands of dollars in dry-cleaning bills.

Both Tassone and Gluckin eventually set up fake companies that would bill the school district for services they didn’t deliver, and employed their significant others in doing so. Tassone had set up one of these shell companies, a fake printing company called WordPower, in his longtime partner’s Manhattan apartment.

In one of the more poignant arcs in “Bad Education,” Tassone has a random encounter in Nevada with a former student from his district, Kyle Contreras (Rafael Casal), who has been working as a bartender and an exotic dancer. Contreras becomes Tassone’s side piece, basically, though the film indicates he was legitimately in love with Contreras. Shortly after it starts to come to light that Gluckin had stolen school funds, Tassone calls Contreras just because, he says, he wanted to hear his voice.

In “Bad Education,” once Gluckin is charged with embezzlement, Tassone quits his job and runs to Contreras, and it’s there in Nevada where we see him get arrested.

Also Read: Everything That Happened in 'Westworld' Season 3 Ep 7, Explained

It’s a solid arc, but it definitely has the whiff of the sort of subplot that could have been an embellishment. So let’s fact check this real quick. Did Tassone really have this secret boyfriend in Nevada?

The answer is yes, though the character’s name was changed for the film. In real life, Tassone used some of his embezzled funds to buy a house with one Jason Daugherty in Henderson, Nev. The full details of the relationship aren’t clear, however, because Daugherty has generally tried to stay out of the spotlight of this scandal.

The real Tassone would regularly use FedEx, on the school district’s dime, to send Daugherty packages. In fact, a clerk in the district said he sent those packages weekly from when Gluckin was forced to retire to a year later when everything came to light.

Also Read: How 'Innocence Files' Directors Overcame Major Access Challenges - And Not Knowing How Case Would Turn Out

And yes, when the real Tassone was in Henderson when he was arrested by the local police. In its news brief about the arrest, the Las Vegas Sun went so far as to refer to Tassone as a “Henderson resident” after he retired from the Roslyn school district.

So yeah, “Bad Education” definitely gets the broad strokes correct on this topic. But the more specific stuff about Contreras might be original to the film, since even today there isn’t much publicly known about Daugherty. But that’s okay — this whole bit very effectively humanizes Tassone even while the film is breaking him down.