Kardashian’s assertive sexual agency, unshakeable in the face of simultaneous public disapproval and a fresh wave of sex-positive cheerleading, recalled another infamous attempt to publicly shame a woman: In 1985, Madonna responded to leaked nude photos with a flippant, New York Post headline-making statement. (“MADONNA ON NUDE PICS: SO WHAT!”) Kardashian’s sex video had already gone viral, jump-starting that reality series as well as a media and business empire, one run by a team of devoted sisters and their manager mother, their resistance to naysayers embodied in a collective financial power sweep. 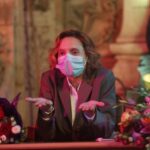 Emi is similarly resistant to being judged, though, steadfastly demanding her right to do as she pleases privately, with the consent of her partner. But her conservative community of Bucharest parents and colleagues, full of moral certainty and a kind of bored COVID-rage (the film was shot in the summer of 2020, and occasional moments of public mask antagonism are just one component of the enveloping misery) demand something else — a socially distant tribunal, one where Emi’s job is on the line and in the hands of people more than happy to call her a slut (as well as any number of other unprintable insults) to her face.

But first, a trudge. The film is broken into three chapters, each with their own title, and “One Way Street” finds Emi traveling across the city on foot as the camera maintains an immediate, documentary-like observance. She encounters hateful grocery-store arguments over the rights of the poor to use government food assistance, endless billboards employing sexually provocative ad copy, demolished buildings and the scrape of construction noise, medical misinformation from distressed pharmacy customers, street hassles with inconsiderate motorists, a shuttered cinema, and an extremely obnoxious pop-up kiosk for “PAW Patrol” merchandise.

Emi is recognized, catcalled, laughed at, and asked out for coffee, all in the time it takes to run errands and head to the school to defend herself from people who would say she’s deserved everything she’s encountered on her journey to their mock trial. 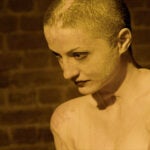 Part 2, titled “A short dictionary of anecdotes, signs, and wonders,” halts the plot for a Godardian lexicon-manifesto via archival photography and news footage (recalling Jude’s 2020 documentary “The Exit of The Trains,” an essay film employing similar technique that details the 1941 massacre of Jewish and Roma people by the Romanian military). Offering comic, bitter commentary on reactionary social attitudes and authoritarian politics floating freely through contemporary Romania and, by extension, around the globe, Jude passes his own litany of verdicts on capitalism, blonde jokes, the weaponization of Christmas, health care, domestic violence, climate change, cinema’s role in selling unthinkable societal horrors, oral sex, and the Romanian Orthodox Church’s historically cozy relationships with dictators.

Nothing on this list of real and imagined obscenities is presented gently or with subtlety, and the break in the narrative is a dare that pays off narratively, even as it feels like the story may not resume at all. Among Romania’s contemporary filmmakers, Jude is among the least likely to package his bleakly comic anger in the form of blank-stare realism. Digressions are the story. Blunt is the way.

His 2018 exploration of the political pressures placed on artists, “I Do Not Care If We Go Down in History as Barbarians,” deliberately and defiantly took on historical revisionism in the service of exposing Romanian racism and anti-Semitism. It’s a lot to take in as the roll call rolls on, but Jude’s deadpan defiance is joyously vicious.

Emi is “guilty” of the most quotidian of sexual acts in her private life, neither famous nor influential enough to build a brand around it even if she wanted to. There’s a void at the center of her trouble — Pascariu’s exasperated, sullen performance is a balancing act of exhaustion and simmering rage — and as a scapegoat in Jude’s comedy of terrors, she’s merely a convenient, random site of community frustration and its viral, COVID-like infectiousness. As such, she becomes the latest target of collective fear. She won’t be the last.