While the Lakers and Celtics got set to renew their historic rivalry over the weekend, the major movie studios were living their version of the Memorial Day Massacre. 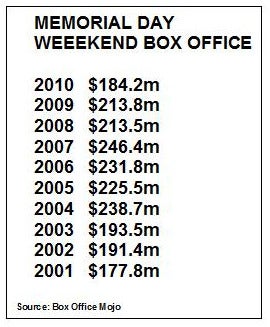 This downer weekend — which was 14 percent below last year’s total holiday gross — capped a tough May start to the summer tentpole season, with "Sex and the City 2," "Prince of Persia," "Shrek Forever After," "Robin Hood" and "Iron Man 2" all underperforming to some extent.

As starts to the big summer season go, this is certainly not a good one.

“I would say that the summer is off to a very inauspicious start,” conceded Chris Aronson, executive VP of distribution for Fox, which will launch family film “Marmaduke” wide this weekend.

With the June release schedule packing other potential hits, including "The Karate Kid," "The A-Team," "Toy Story 3," "Knight and Day" and "Twilight Saga: Eclipse," things could turn around quickly.

But the first key destination on the summer calendar — Memorial Day — was a disappointing wash.

In fact, with the fourth "Shrek" winning the weekend, grossing $57.1 million with the help of inflated 3D ticket prices, overall Memorial Day attendance was only about 24.2 million, according to a Hollywood.com estimate — the smallest number of Memorial Day ticket sold since 1993.

It wasn’t supposed to go down this way. The May tentpoles were expected to further propel a domestic box office that was already on pace to shatter 2009’s overall $10.6 billion revenue mark.

In fact, with first-quarter domestic box-office revenue totalling $2.65 billion, up 9 percent over Q1 2009, the trend line certainly seemed to be point up.

Indeed, with “Sex and the City 2” and “Prince of Persia” joining a list of holdovers that included “Shrek Forever After,” “Iron Man 2” and “Robin Hood,” the weekend’s four-day frame looked like it might be a record-breaker – in a good way — just a month back.

However, each of these big May launches – most of them budgeted at over $200 million — has underperformed.

Both of the big Memorial Day weekend launches, “Prince of Persia: The Sands of Time” and Warner New Line’s “Sex and the City 2” scored on the low side of their pre-release tracking.

Facing stiff male-audience competition from “Iron Man 2” and “Robin Hood,” and doing so with an unproven action star in Jake Gyllenhaal, the Jerry Bruckheimer-produced “Persia” grossed just $37.8 million in the U.S. and Canada, which was on the low end of studio expectations.

“Sex 2” got off to an early $14.2 million start on Thursday, with the avid female franchise faithful rushing out to see it. But it grossed only $36.8 million for the four-day holiday weekend period. Projections called for a five-day premiere total of over $60 million, but it ended up with only $51 million

This followed the extraordinarily poor start for the fourth “Shrek” a week prior, with the film’s $70.6 million start falling about $10 million below the low end of pre-release expectations.

Meanwhile, earlier in May, Universal’s Ridley Scott-directed “Robin Hood” got off to a tepid $36.1 million opening. And the $128.1 million start for Marvel’s “Iron Man 2” was negatively colored by pre-release tracking estimates that pegged it in the $160 million-plus range.

For his part, Disney’s Viane conceded, “I get that it was a little slow this past weekend.” However, he believes better days lay ahead when school lets out.

“We’re looking two weeks down the road when we launch ‘Toy Story 3,’ and it’s got all seven days of the week to play,” he said. “That’s the arena that’s going to balance out the rest of the summer.”