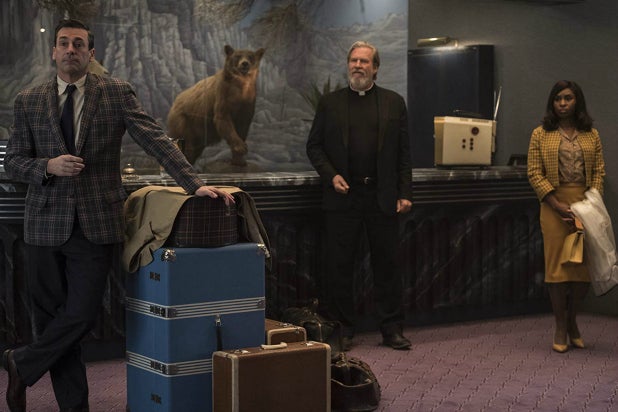 A priest, a vacuum salesman and a singer walk into a hotel — that could have been an interesting new take on an old joke, but instead it’s how writer, director Drew Goddard sets the stage for his latest film “Bad Times at the El Royale.”

From that set up, Goddard takes audiences on a journey to explore the evils of power, racism and toxic masculinity.

Set in 1969, the film follows seven strangers, each with a secret to bury, who meet at Lake Tahoe’s El Royale, a rundown hotel with a dark past. Over the course of one fateful night, everyone is presented with one last shot at redemption — before everything goes to hell.

Also Read: 'Bad Times at the El Royale' Director Hopes Chris Hemsworth Will Be in Every Movie He Makes

Though the time period is the 1960s, Goddard told TheWrap that more than anything the decade was simply a mirror of today’s turmoil.

“One of the things that’s depressing is the turmoil that we’re seeing in today’s world, when you start looking at history, a lot of this stuff is not new,” Goddard said during a phone interview with TheWrap. “These bigger evils of power and racism as a tool to achieve power, as well as toxic masculinity, these are issues that our country has been dealing with probably from inception, if we’re being honest. But certainly we’ve seen this in the last century time and time again and the ’60s just felt fertile for some of these issues.”

There’s a seediness and darkness in “Bad Times at the El Royale” that resembles Goddard’s 2012 feature directorial debut “The Cabin in the Woods.”

“Bad Times at the El Royale” isn’t intended to be a cynical film, Goddard said. In fact, the director considers himself a hopeful person and said “there’s a constrained hope that runs through this film.” But the darker side of humanity was certainly something Goddard was keen on exploring.

“It was certainly not my intent to make it a cynical film, but I also am interested in dealing with the darker side of humanity and exploring what that means critically in film,” Goddard said. “That darkness was very much something that I wanted to explore with this film.

“[The film] also sprang from a love of the music of the ’60s, love of the fashion of the ’60s, love of the style, love of the people and what they were going through, because they really lived through some intense political turmoil and they walked out of that and created some of the best music and art and cinema that we’ve ever seen. And I don’t think that’s a mistake. The turmoil led to some real beauty, at least I hope it did because that gives me comfort in today’s times.”