If Will Smith had slapped Chris Rock on stage at the BAFTA Awards, things would’ve been handled much differently than at the Oscars, according to the British Academy.

According to Sara Putt, chair of BAFTA’s television committee and deputy chair of BAFTA, if a similar incident had occurred during their film awards ceremony, which took place earlier this month, she would’ve made a different call than Oscars producer Will Packer.

“They would be removed from the ceremony,” Putt told THR. And no, they wouldn’t be allowed back in the building to receive any awards they won after the fact. “It’s just a complete red line for us,” she added. 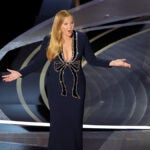 Packer did speak out online after the incident at the Oscars, admitting that it was “painful” to watch Smith charge the stage to hit Chris Rock, and see everything that came after.

“Black people have a defiant spirit of laughter when it comes to dealing with pain because there has been so much of it. I don’t feel the need to elucidate that for you. But I also don’t mind being transparent and say that this was a very painful moment for me. On many levels,” Packer tweeted on Monday.

Though many have been critical of the choice to not have Smith removed from the Oscars, some have also defended the decision, including “The View” host and Academy Governor Whoopi Goldberg.

“The reason they didn’t go and take him out is because that would have been another 15-20 minute explanation of why we’re taking the Black man out five seconds before they’re about to decide whether he’s won an Oscar or not,” Whoopi said on “The View” on Tuesday. “And I’m gonna say I believe Will Packer made the right decision. He said, ‘Let’s get through the rest of this so we can deal with it wholeheartedly.’ So, that’s what went on.”