CNN contributor Bakari Sellers responded Tuesday to a dig from Fox News’ Laura Ingraham, saying he was disinclined to “argue with a fool.”

Sellers invoked his South Carolinian father, saying he “would say you never argue with a fool because you don’t know who is watching and they can’t tell the difference.” 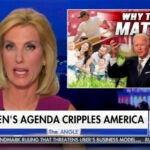 “Bakari Sellers suddenly showed in North Carolina today to condemn the police, in another case pouring on the dramatic effect as if you needed it, and sporting an accent that maybe I missed something, but I never heard him use on TV before,” Ingraham said on her Fox News program Monday night. The comments went mildly viral and she trended on Twitter into Tuesday.

Sellers served in the South Carolina House of Representatives from 2006 to 2014. He retweeted a few defenders Tuesday, including CNN’s Jake Tapper, who wrote, “Sounded to me exactly like every single time I’ve heard @Bakari_Sellers speak in person and on air for years. No change. Including the very first time we spoke, after I asked Twitter for help finding a lawyer in South Carolina to help a veteran in distress.”

Watch below, via The Hill.