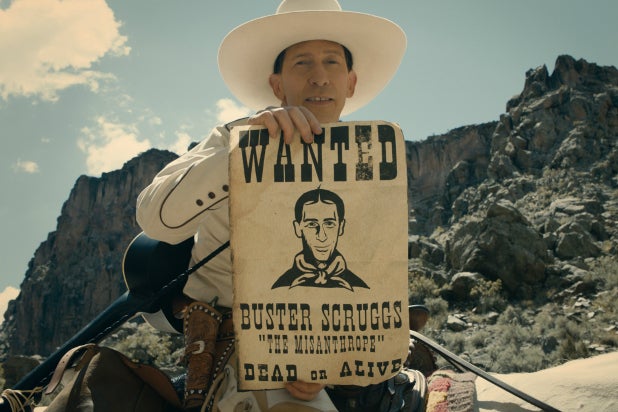 It’s only fitting that the Coen Brothers new project is backed by Netflix since it’s a Western-themed anthology film that plays like the forced-binge experience of an anthology TV series.

While the Coens claim in the press notes for “The Ballad of Buster Scruggs” that they were inspired by “those films made in Italy in the ’60s which set side-by-side the work of different directors on a common theme,” they were apparently so inspired that they made an anthology movie as wildly uneven as the ones they’re aping. (The 1968 “Spirits of the Dead” gave us Fellini’s sublime “Toby Dammit,” yes, but no one ever talks about Roger Vadim’s silly contribution “Metzengerstein.”)

None of the Coens’ tales of the Old West is an outright dud, but the movie never matches the eponymous opening sequence, starring Tim Blake Nelson as a white-hatted singing cowboy with a tune in his heart, a kind word for everyone he meets, and an exceedingly itchy trigger finger. It’s like the collaboration Gene Autry and Sam Peckinpah never made, and it captures the Coens at their best: self-reflexive, absurdist, witty and outrageous.

See Photos: Hollywood Filmmaker Brothers, From the Russos to the Weinsteins

The rest of the film struggles to match this opening bit’s energy, but there are delights to be discovered along the way: James Franco’s would-be bank robber cheats death, only to have death cheat back; a traveling theatrical producer (Liam Neeson) reaches a crossroads with his unusual but talented orator (Harry Melling, “The Lost City of Z”); a grizzled prospector (Tom Waits, who can do “grizzled” with one hand tied behind his back) makes a discovery and must protect it; an unmarried pioneer woman (Zoe Kazan) tentatively explores romance with the wagonmaster (Bill Heck, “Pit Stop”) on her way to Oregon; a quintet of passengers (including Brendan Gleeson, Tyne Daly and Saul Rubinek) take a stagecoach to an uncertain destination.

The fact that these vignettes may have been originally conceived as discrete TV episodes comes through pretty clearly, as there don’t seem to be many unifying themes or ideas at play, except maybe for a running gag that randomly inserts a French person into almost every story for no apparent reason. Some of them make the case that the American West was settled almost entirely by rogues, thieves and murderers, while others contradict that notion.

The change in perspective does allow the Coens to explore different facets of their own interests in Westerns as a genre; the wagon-train sequence calls to mind John Ford, while the James Franco tale (mainly a shaggy-dog story that builds to a nifty punchline) has more of the spiky humor of Sergio Leone. And they’ve perhaps never leaned into the grandeur of nature as they do with the prospector story, laden with big sky and tall trees and rushing rivers.

The Coens and casting director Ellen Chenoweth (“Suburbicon”) skillfully blend familiar faces with relatively new ones. Among the names to remember here are Melling (giving a great performance as a performer, and you’d never guess he used to play Dudley Dursley in the “Harry Potter” movies) and Heck, as well as Irish actor Jonjo O’Neill (“On Chesil Beach”), who plays Gleeson’s business partner; he’s got a skill for that specific brand of Coen acting — almost but not quite overdoing it, invisible pivots from comedy to menace — that suggest they’ll be using him again soon.

Not that the marquee names aren’t terrific as well. Daly and Rubinek (and Chelcie Ross, as an eccentric old trapper) have a hilarious anti-chemistry, made all the more amusing by the close quarters of the stagecoach. And Kazan has perhaps never been better, playing a woman unafraid to venture deeper into the untamed West because she reckons it can’t be any worse than what she’s leaving behind.

“The Ballad of Buster Scruggs” will be, at best, a charming footnote in the Coens’ career, a project they enjoyed doing, and possibly even more enjoyed turning into a film so they can keep their résumé free of episodic television. As Netflix binges go, it’s a pretty good one, but be ready to love some episodes more than others.