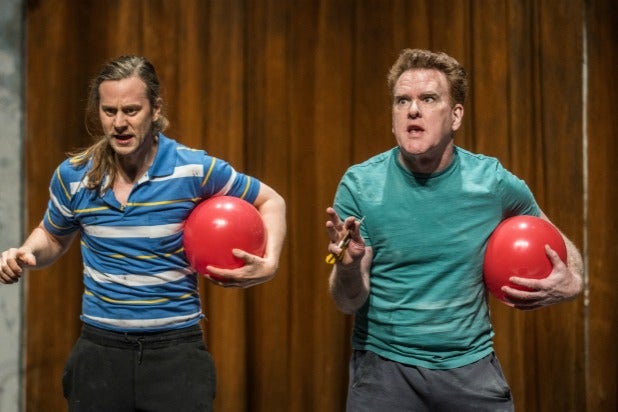 Enda Walsh knows his Samuel Beckett. Walsh’s play “Ballyturk” is a 21st- century variation on “Waiting for Godot,” and it opened Sunday at Brooklyn’s St. Ann’s Warehouse after a run at Dublin’s Abbey Theatre.

Besides the mash-up of pop tunes that actors Tadhg Murphy and Mikel Murfi dance, run, exercise or shimmy to while dousing each other with baby powder, the major departure from Beckett’s classic is that Godot or God or the Angel of Death (Olwen Fouere) shows up halfway through this 90-minute play to make her case.

It’s clear early in the play that the men haven’t been outside their ill-kept room for years. Murphy is basically playing Stanley Laurel to Murfi’s Oliver Hardy, who tends to take control because he’s lived there longer, although neither of them can recall where they came from or how they ended up in this room. What appears to keep them going is a fearful hatred for the citizens of a town they have named Ballyturk, which at this point in time may be more memory or total fiction than it is reality.

The upstage wall of their room is wallpapered with crude human portraits at which they take turns throwing darts. In the drama’s most heartbreaking moment, Murphy’s character recites the names of Ballyturk’s inhabitants, while Murfi’s character impersonates them in rapid succession. The impersonations continue even when Teho Teardo’s original (and deafening) score drowns out Murphy’s words and Murfi is reduced to enacting a frenetic, empty ritual.

The most frightening moment is Fouere’s spectacular entrance, which should not be described here.

Also Read: 'John Lithgow: Stories by Heart' Broadway Review: An Actor Who's Bigger Than His Show

In other words, the best moments in “Ballyturk” have more to do with Walsh’s direction of his play than what he’s given his characters to say. In the former endeavor, he is aided greatly by Teardo, set designer Jamie Vartan, sound designer Helen Atkinson, and especially Adam Silverman, the lighting designer.

As a director, Walsh is visceral and vivid. As a writer, he enjoys being obscure. Is Walsh telling us that life is merely one distraction after another until the final end game, death, which can’t be ignored? He throws out words of wisdom like “For everything is here and we are here to lay down legacy,” but more memorable is a long dissertation on the uselessness of the left hand, unless you happen to be left-handed.

That this monologue is delivered by Fouere’s character is especially odd. But odd to the point of opaque is a hallmark of Walsh’s work. For example, the characters in “Ballyturk” are credited as 1, 2 and 3. Is this profound or simply lazy on the playwright’s part?