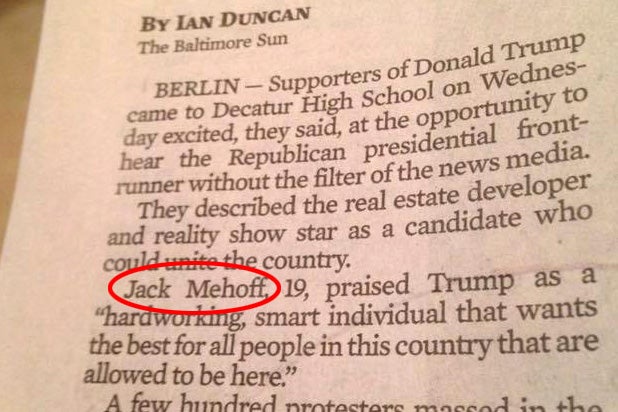 Here’s an important tip for any journalist interviewing someone with a suspicious name: Ask for ID.

It’s a lesson a Baltimore Sun reporter learned, um, the hard way. Ian Duncan, who’s ironically listed as the “Military and Intelligence” reporter for the paper, had Twitter in a tizzy on Wednesday after he published an article about a Donald Trump rally in Maryland that featured a quote from a 19-year-old (that should have been his first clue) Trump supporter with an unusual name: “Jack Mehoff” (for those who are a bit slow, read out loud … it’ll sink in eventually).

So writes the Sun:

Jack Mehoff, 19, praised Trump as a “hardworking, smart individual that wants the best for all people in this country that are allowed to be here.

Also Read: Deez Nuts Will Have to Pull Out of Presidential Race

We don’t know if the name is real (if it is, that guy’s parents should be shot), and apparently neither does the reporter, who tweeted, “At this point I have no way to prove I didn’t meet a real life Jack Mehoff who is a Trump supporter. But erm … Yeah.”

We did call 411, and — after explaining to the operator that this was definitely not a prank, we swear — the slightly stunned man on the other end of the line told us after a quick check that there is — shockingly — no Jack or John Mehoff listed in Baltimore. Of course, there’s a slight chance Mr. Mehoff came from another city, lives with his parents … or, if you believe in Occam’s razor, is just a 19-year-old kid having fun.

We did contact Duncan to see if he’d like to elaborate … but no cigar (OK that was the last pun, we promise).

Either way, the article quickly found its way to the Twittersphere, setting the social media network on fire.

P.S., Deez Nuts just called. He wants his 15 minutes back.

I think @baltimoresun has lost a step. Jack Mehoff? Were Mike Hunt and Ben Dover not able to comment? pic.twitter.com/lpLGYGGNAA

Has the Baltimore Sun interviewed Jack Mehoff about Prince yet?

Jack Mehoff is the hero we need right now and the one we deserve.

if Jack Mehoff turns out to be his real name & he's just some nice, politically misguided kid who we're all cyberbullying you gonna feel bad

19-year-old Trump supporter Jack Mehoff. The internet can retire for the day, and it's time to go home. https://t.co/kaWmACp8bB

Balto Sun publishes quote from "Jack Mehoff." There but for the grace of God….https://t.co/AAIyjbZ8tj

The Baltimore Sun reports Jack Mehoff is a Trump supporter. No word yet from Mike Hunt. https://t.co/8fHHse1mbY pic.twitter.com/SlfZnkb6NI