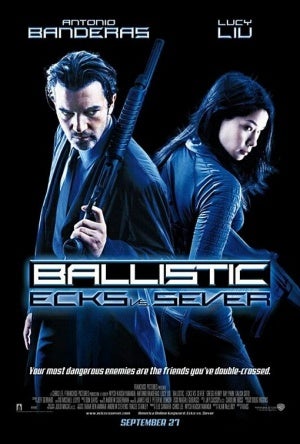 The 2002 action film starred Antonio Banderas and Lucy Liu — and movie review site RottenTomatoes.com says it was the worst-reviewed film of the past decade.

The site has listed its 100 worst-rated "Worst of the Worst" — a group that also includes everything from legendary duds like John Travolta’s "Battlefied Earth"  to chuckle-deficient comedies ("Epic Movie") to hapless sequels ("Basic Instinct 2").

As RottenTomatoes puts it in the intro to its countdown: "Most films, even profoundly mediocre ones, can expect to receive at least cursory support from the pundits. However, once in a while, a film will take such a critical drubbing that further attention is warranted. That’s where our Worst of the Worst list comes in."

Winner "Ballistic" was directed by Thai helmer Kaos, aka Wych Kaosayananda, whose first film, "Fah," was a huge hit at in his native land. That success landed him the chance to be the first Thai filmmaker to handle a big-budget Hollywood production.

Alas, the $70 million film was his first and last in Hollywood, in part because of the 107 reviews tallied by RottenTomatoes, there was not a single positive one.

Rounding out the list’s worst 10 films:

– 2004 sequel "Superbabies: Baby Geniuses 2," which employed the talents of Jon Voight and Scott Baio to put bad jokes in the mouths of babes;

– and 2008’s "Witless Protection," one of several films on the list starring Larry the Cable Guy.

None of the 10 worst films had even one positive review; in RottenTomatoes’ parlance, they were 100% rotten.

Ben Affleck is well represented too, for an Oscar winner, with the expected "Gigli" (No. 73) and "Surviving Christmas" at No. 91.