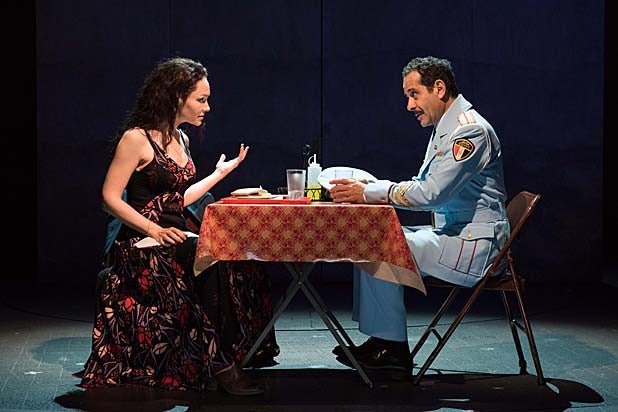 Finally, a new musical that offers not one anthem. Better yet, there’s not one over-amplified caterwauling power ballad. Composer David Yazbek chooses instead to seduce with music and lyrics that slyly slip into our consciousness through an inspired repetition, with melodies unfolding to make the spirit both ache and soar.

After a successful run at the Atlantic Theater Company, “The Band’s Visit” opened Thursday at Broadway’s Barrymore Theatre, with Yazbek’s score perfectly married to Itamar Moses’s lovely book. Their musical is based on Eran Kolirin’s 2007 movie about a group of Egyptian musicians sent to perform at an Arab cultural center in Israel, only to discover they’re stranded for a few days in the wrong desert town.

Loosely linked vignettes featuring several characters often make for effective movies, where atmosphere and mise en scene can be everything. But musicals tend to require more drive and focus. Yazbek and Moses get around that initial liability by being extraordinarily talented, one, and having David Cromer for a director, two.

Cromer doesn’t find the humor in zingers or one-liners (Moses hasn’t written any) but rather in the quirks of characters and places — in this case, one of those exotic locales you sometimes travel 9,000 miles to find only to discover it’s not worth five minutes of your time until you revisit it in your memories.

“The Band’s Visit” meanders most genially in the opening scenes but soon uncovers not one but several love stories — or, at least, attempts at people trying to connect with the opposite sex in Bet Hatikva, a small town bathed in dust, fluorescent lights and much concrete. Scott Pask’s sun-baked set design captures the desolation, with Yazbek’s music never failing to fill that void.

If this description makes “The Band’s Visit” sound like a real downer, it isn’t. Or, it’s no more a downer than “Picnic” if you can imagine Madge never leaving her small Kansas town and, now in her 30s, wishing she had. Dina, who runs a local greasy spoon, is an Israeli Madge, and Katrina Lenk makes her every bit as glamorous as Kim Novak in the 1955 film version of the William Inge play.

Dina’s unlikely suitor is Tewfiq, the band’s conductor. Suffice to say, the effectively reserved Tony Shalhoub is no William Holden, and his nebbish middle-aged widower wisely leaves all lothario charms to the struttingly unreserved Ari’el Stachel. This trumpet player never fails to find the cocky humor in every seduction, which usually begins with “Do you like Sheet Baker?” and ends with his playing “My Funny Valentine.”

Mixing golden oldies into an original score is dissonance of the worst kind for musical-theater purists. When Elton John drops Tchaikovsky in the middle of “Billy Elliot” it’s like Leonard Bernstein resorting to “Jailhouse Rock” instead of writing “Dance at the Gym” for “West Side Story.” Plain lazy.

Yazbek makes the mismatching work. Standards like “My Funny Valentine” and “Summertime” emerge as brief interludes only to spur the characters to unique vocal monologues. A disco version of the rhythm-and-blues “Sunny” pulsates at a roller-skating rink as two Israeli teens try to make contact but fail miserably, with each other and as skaters.

Soon, Haled the trumpet player is singing and showing the boy (Etai Benson) how to score romantically through music (“Haled’s Song About Love”) and seasoned make-out moves, only to have the novice remove the expert’s hand from his knee near the end of the lesson. The moment is one of Cromer’s many inspired silent bits of business that are both touching and funny.

“The Band’s Visit” is filled with music that begins as something you might hear in a taxi in Tel Aviv or Cairo (or New York nowadays). To a foreigner’s ears, these pop/folk tunes can seem indistinguishable. Yazbek uses them as a vamp on which he then performs marvelous variations to make us hear the music fresh, and in the process almost reinvents the Broadway musical.

Rodgers and Hammerstein honed a very successful format for musicals. Early in their shows, they gave us what came to be known as The Noise, a rousing number with chorus (“Bloody Mary,” “June Is Busting Out All Over”), with an inspirational anthem (“You’ll Never Walk Along,” “Climb Every Mountain”) delivered much later.  In between were any number of ballads, love songs and other beguiling tunes.  In recent years, Broadway composers, looking to deliver one big showstopper after another, have given us nothing but Noise and anthems. Yazbek dares to give us neither.