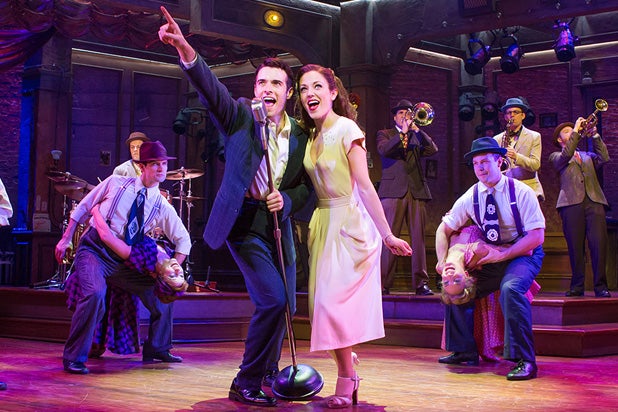 It has not been a spectacular season for dance on Broadway — until now. A year ago, Andy Blankenbuehler won the Tony Award for choreographing “Hamilton,” against such stiff competition as Savion Glover and his superb work on “Shuffle Along.”

This year, there’s almost no competition for Blankenbuehler’s arresting choreography in the new musical “Bandstand,” which opened Wednesday at the Bernard B. Jacobs Theatre. Set in post-World War II America, the show almost never stops dancing, and when it does Blankenbuehler keeps the motion going with a few steps here, a few steps there, that in a later scene will blossom into a full swing ballet.

It helps that Blankenbuehler also directs, and his work on “Bandstand” signals the potential that Broadway may have found another Jerome Robbins, Bob Fosse or Michael Bennett. “Bandstand” is only the second Broadway musical for which Blankenbuehler does double duty, following “Bring It On” five years ago. All he needs now is a musical worthy of his talents. “Bandstand” is not that musical.

Blankenbuehler uses dance to contrast the soldier’s current life back home in America with their nightmares of combat overseas on the battlefield. At times, the dancers literally carry on their backs the fellow soldiers they lost in Europe or the South Pacific.

Those memories aren’t the worst of it. A soldier named Donny (Corey Cott) can’t find a job back home in Cleveland, and instead of turning to alcohol or drugs like so many other vets, he takes refuge in his music to start up a band.

When these men play swing, sometimes a trombone, piano, or trumpet will take off on its own to riff. Blankenbuehler’s dancers do that too, often breaking away from the ensemble for what appears to be inspired improvisation. Almost never in “Bandstand” is this troupe of nine hoofers ever in unison. It’s a fascinating collage of movement to watch, and they keep the show barreling ahead at a breakneck speed for the hour-long first act.

The book by Rob Taylor and Richard Oberacker initially intrigues, because it’s so damned dark for a Broadway musical. Alcoholism, divorce, drugs, unemployment, chronic war wounds. This is 1945, after all, when America was known for taking care of its vets. Or were they taken care of?

“Bandstand” suggests that either these men took care of themselves, or they went under. Oberacker, who wrote the music and co-wrote the lyrics with Taylor, is good at pastiche. His re-creation of swing music from the big band era is spot on. Where he’s much less successful is with the music that is presented as Donny’s original compositions. In the first act of “Bandstand,” we put up with “Donny’s music,” because the dancing and the pastiche dominate.

When replicating old standards, Oberacker and Taylor keep their lyrics simple. When they get serious, they go heavy on the lyrics, cramming their songs with more exposition and ideas than the musical line can support.

And there’s another big problem that doesn’t become painfully apparent until the second act. Alcoholism, divorce, drugs, unemployment, and chronic war wounds are not a plot. After Donny meets and falls in love with a war widow, Julia (Laura Osnes), whom he makes the band’s lead singer, there’s no place for “Bandstand” to go but to New York City for a big radio contest.

It’s then that you understand how much Oscar Hammerstein II knew about writing the book for a musical. He knew that one couple’s romance could not sustain a musical, and that most shows need a secondary love story. “Bandstand” has that another couple, but it keeps that crumbling marriage with two kids offstage. As Donny and Julia’s love blossoms, we should be watching this other relationship fall apart.

The second act is one long uneventful slog to the big city. Donny and Julia momentarily split. We know they will get back together. Both Cott and Osnes have pleasant singing voices, but this breakup only serves to show Julia’s petulant side. What other side she might have is never revealed.

The first act of “Bandstand” borrows much from Martin Scorsese’s film “New York, New York,” about an obnoxious veteran (Robert De Niro) who wants to play jazz. Cott displays the requisite brashness, but despite his resemblance to Montgomery Clift in a T-shirt, he utterly lacks vulnerability. For what it’s worth, De Niro had that problem in the Scorsese film too.