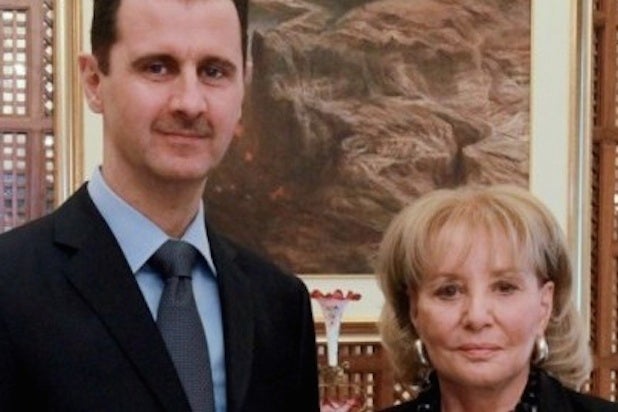 In her 53-year career, Barbara Walters spoke with presidents, pop stars and many other famous figures — and some of them were intense.

As Walters retires, we look back at some of her most passionate and provocative discussions.

“In 2000, I pushed Ricky Martin very hard to admit if he was gay or not, and the way he refused to do it made everyone decide that he was,” she told the Toronto Star. “A lot of people say that destroyed his career, and when I think back on it now I feel it was an inappropriate question.”

2. Mark David Chapman
In a 1992 prison interview, Walters interviewed John Lennon’s assassin. Some Beatles fans and TV critics felt she was exploiting Lennon’s memory and giving the spotlight to a murderer.

3. Mike Tyson and Robin Givens
Walters asked Robin Givens about her then-husband’s alleged domestic violence — as he sat there.  Years later on “The View,” Tyson told Walters he felt “shanghaied in the moment” and “bushwacked” by the interview.

4. Bashar Assad
Walters held the Syrian leader’s feet to the fire about his treatment of political dissidents in a 2012 interview. She later acknowledged a conflict of interest, because she helped the daughter of Syria’s U.N. ambassador by trying to get her an internship or college admission.

“In retrospect, I realize that this created a conflict and I regret that,” Walters said.

5. Monica Lewinsky
Lewinsky broke her silence about her affair with President Clinton on “20/20” in March 1999. She said she still had emotions for Clinton, which shocked audiences. It was a ratings bonanza.