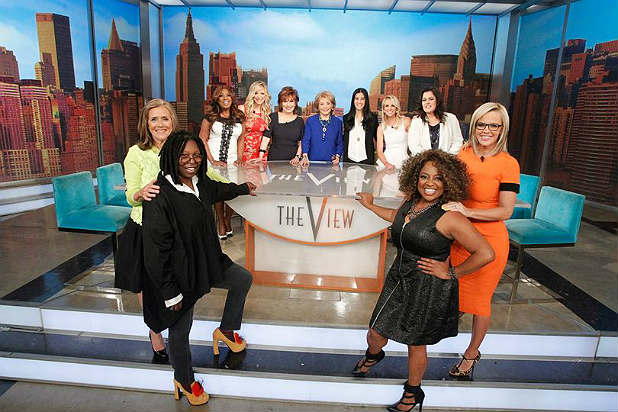 “I didn’t have a lot of mentors,” Barbara Walters said during an off-camera Q&A during “The View” reunion episode Thursday. Of course she didn’t: She had to blaze a path for herself, and the 10 past and present “View” hosts who came together to bid her goodbye.

“This is like Barbara’s last supper,” quipped Joy Behar.

Viewers at home don’t see the question-and-answers sessions on TV: They come during the commercial breaks, and allow the studio audience to ask the hosts whatever they want.

Questions included where Whoopi Goldberg got her shoes (try heels.com, she said) and where Elisabeth Hasselbeck got her dress (“I stole it from Barbara”).

And, of course: Who inspired Walters?

What you also don’t see when you watch ” The View” at home is that it’s actually kind of hosted by a man. Tom Kelly is the babyfaced emcee who takes audience questions during the breaks, and told the 120 women and 12 men (not including network types) when to stand, cheer, and applaud. He flirted and cajoled. He borrowed a woman’s cane.

Also read: Woody Allen: ‘Journalists Have Always Been Heroes to Me’

Wearing a tuxedo, wiping sweat constantly, he aspired to an air of goofy sexlessness. When he used the cane as a stripper pole, it worked because he seems so unlike a Chippendale’s dancer. (One of his proven lines: “I held onto my virginity for 21 years for Jesus. And it held onto me for five more.”)

It was Kelly who served as the go-between when someone in the audience asked Walters about her greatest influences. Walters, at a loss, said her mother was her biggest one. And she couldn’t think of another.

“No, there was nobody,” agreed Goldberg. “That’s why you’re so great.”

The front seats were filled with ABC executives, including Anne Sweeney and Ben Sherwood. Walters took a moment to thank them after the taping.

The show presents itself as an honest place for women to talk about their lives. But one lie was told, with a wink to the studio audience. Sherri Shepherd mentioned taping Walter’s final show “tomorrow.”

In fact, it was taped Thursday, right after the reunion show. The women of “The View” shuffled offstage, changed clothes, and came out to do it one last time.

Or maybe not. There was another audience question: What is the show doing next week?