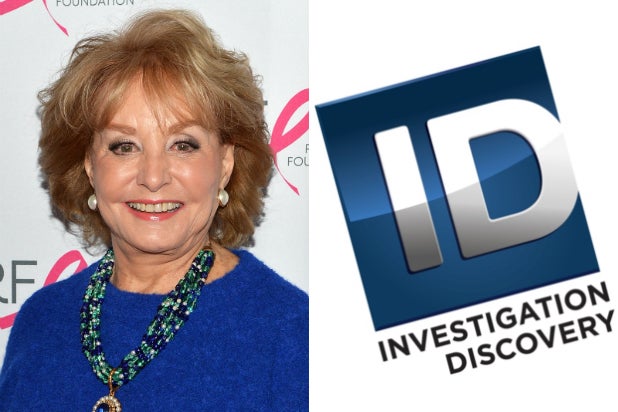 Walters, who retired from ABC’s “The View” in May 2014, will reveal personal stories and never-before-seen footage from her coverage of crimes committed by Jean Harris, Jim Bakker, Mark David Chapman and others. The six-part series is produced by ABC’s Lincoln Square Productions.

These new series join the previously announced Wendy Williams series “Death By Gossip,” which tells stories of murders stemming from the rumor mill.

Below is ID’s full slate.

AMERICAN SCANDAL WITH BARBARA WALTERS
In AMERICAN SCANDAL, television legend Barbara Walters revisits some of the most compelling stories she has covered in her career, taking viewers inside scandalous stories that captured the public’s attention and sharing personal experiences and never before seen footage. In the six-part series, produced by ABC’s Lincoln Square Productions, new details about the crimes committed by Jean Harris, Jim Bakker, Mark David Chapman and others are revealed by those closest to them.

SERIAL THRILLER
In the heart of a terrorized community, SERIAL THRILLER propels viewers into a world of damage, untimely death and mystery. The three-part original scripted series, produced by October Films, follows a cast of intriguing characters, all on a collision course with fate. The lives of investigators, victims and associates intertwine as the mystery of one of America’s most notorious serial killers unravels.

FORBIDDEN: DYING FOR LOVE
From the couple who breaks religious traditions for love to the priest who has fallen for a nun, these star-crossed lovers have defied the forces trying to keep them apart. But once they’ve crossed the line, anything becomes possible.

KILLER CONFESSIONS
In KILLER CONFESSIONS, murderers reveal their darkest criminal acts through their own confession. Each episode follows homicide detectives into the interrogation room as cameras record the killer’s emotions, behaviors and ultimate confession.

EVIL LIVES HERE
How well do you know your housemates? EVIL LIVES HERE tells the heart-stopping tales of people who have shared a home, with a killer. In each episode, loved ones reveal how they came to discover their significant other’s evil side.

RETURNING ORIGINAL SERIES
VANITY FAIR CONFIDENTIAL
Each one-hour long episode of VANITY FAIR CONFIDENTIAL features a great mystery from the pages of Vanity Fair magazine. Offering unprecedented access to the magazine’s writers and editors, the series takes viewers to the heart of some of the most controversial dramas in history – dramas centered at the cross section of power, wealth and celebrity. The series is produced in conjunction with Conde Nast Entertainment and True Entertainment.

HOMICIDE HUNTER: LT. JOE KENDA
A murder will change the life of a victim, their families, and the convicted killer… but what about the investigator? Lt. Joe Kenda, a veteran of Colorado’s homicide investigation unit with one of the highest case closure rates in the country, reveals chilling memories of murders that still haunt him.

A CRIME TO REMEMBER
Set against the backdrop of Studebakers, fedoras, and three-martini lunches, these stories of truly mad men and women reveal complicated relationships where thwarted dreams and repressed passions led to terrible crimes in the ’50s and ’60s.

DEADLINE: CRIME WITH TAMRON HALL
Crime investigation, as any homicide detective will testify, is all about speed. Anchored by NBC’s Tamron Hall, and produced by NBC’s Peacock Productions, DEADLINE: CRIME goes beyond the headlines to explore not only what happened, but why it happened, and how it was investigated.

SURVIVING EVIL
SURVIVING EVIL presents real-life stories of victims who fought back against their attackers and, against all odds, survived. Hosted by Charisma Carpenter, SURVIVING EVIL offers an empowering and inspiring look at true-crime stories in which the victim turns the table on their assailant in order to stay alive.

YOUR WORST NIGHTMARE
From monsters hiding in the closet to the boogeyman lurking in nearby shadows, evil can interrupt even the sweetest of dreams. But what happens when a bad dream is actually a waking nightmare? YOUR WORST NIGHTMARE brings real thriller crimes to life on ID.

MURDER COMES TO TOWN
Beyond the boundaries of ordinary life, there is another world that lies just outside of town, where places have no names. MURDER COMES TO TOWN reveals what can happen in these solitary and desolate places. Gripping tales of betrayal and murder unfold as told by friends, family, and neighbors of the deceased.

ICE COLD KILLERS
As America’s last true frontier, Alaska is an ideal destination for people wanting to experience the intrinsic beauty of isolated nature – but its wilderness also provides the perfect setting for keeping secrets. ICE COLD KILLERS explores crimes committed in the harshest of climates against a backdrop of rugged wilderness as unforgiving as the murders themselves.

EVIL TWINS
Channeling sibling rivalries and deadly childhood pacts, EVIL TWINS follows true-crime mysteries surrounding cases of these double-duty archetypes. Each episode reveals a pair of sinister siblings: twins who tag team to kill together, twins who turn on each other, and even the good twin versus the evil one.

WEB OF LIES
WEB OF LIES unravels tragic stories of deception and manipulation triggered by online interactions. From predators lurking behind their Facebook profiles to creeps scouring chat rooms for their next victim, WEB OF LIES is back with even more jaw-dropping, cautionary tales of deception, seduction, and violence.

MURDER BOOK
Deep within the dusty drawers and cabinets of every police station is a library of binders containing detailed information about unsolved murders. Each contains the spirit of their victim waiting for the day that someone will finally catch their killer, this is their MURDER BOOK.

WIVES WITH KNIVES
WIVES WITH KNIVES features women who stabbed their significant others…sometimes with deadly consequences. Host Dr. Casey Jordan, a criminologist and behavioral analyst with a law degree, sits down with each wife to reveal what events or motivations led them to slice and dice.

A STRANGER IN MY HOME
A STRANGER IN MY HOME is the perfect blend of mystery and suspense, telling stories of what happens when strangers come together under one roof and begin new relationships. You might think you can trust this new acquaintance, but looks can be deceiving.

UNUSUAL SUSPECTS
Investigation Discovery shines a light on some UNUSUAL SUSPECTS, showing that even the nicest neighbor can have a sinister side. UNUSUAL SUSPECTS profiles those you would least expect to be capable of committing such dark deeds.

DEADLY WOMEN
DEADLY WOMEN takes viewers on a journey into the bizarre world of women who kill for thrills. Featuring Candice DeLong, a former FBI agent and criminal profiler, this series explores the psyche of female killers, showing what turns love affairs into fatal attractions or how twisted minds and dark secrets can send women on lethal rampages.

FATAL VOWS
When marriages fail, divorce can turn ugly and even deadly. What was once a passionate union becomes spite, greed, backstabbing, and betrayal. FATAL VOWS explores tumultuous, shocking, and high-stake divorces and the deadly murders linked to them.

20/20 ON ID
Host John Quinones and the correspondents of ABC News’ acclaimed show 20/20 dig beneath the headlines to reveal human stories of victims, their families, and the search for truth and justice.

48 HOURS ON ID
Hosted by Maureen Maher, 48 HOURS ON ID features in-depth investigations that explore murder, gambling and jealousy with an unique approach that covers cases from multiple angles with dramatic results.

DATELINE ON ID
Go behind the headlines with host Lester Holt to investigate, with journalistic integrity and cutting-edge style, baffling crimes and compelling real-life dramas.