The Public Theater waits until intermission to hand out Playbills for Robert O’Hara’s new play “Barbecue,” which opened Thursday in the Newman Theater. There’s one big twist that they don’t want to give away, and rightfully so.

O’Hara’s comedy depicts a clash of cultures that can best be described as “Breaking Bad” meets “Married…With Children.” Which means it’s wickedly funny: When a character gets tasered by her father, the laughter stops the show, literally.

But the real delight of “Barbecue” is watching its bold, audaciously structured story unfold. Even with your Playbill in hand, there are more surprises to come in the second half, because only then do we learn just how knotted that first-act twist is.

Of course, that’s the problem reviewing “Barbecue.” You shouldn’t read your Playbill first or read any reviews, including this one. You’re warned, but I’ll try to be discreet and keep it short.

A mother (Becky Ann Baker) brings together her husband (Paul Niebanck) and two daughters (Arden Myrin and “Orange Is the New Black” star Constance Shulman) for a barbecue in the park.

But it’s not an ordinary barbecue despite the hamburgers and ketchup and the supersize bottle of Chivas Regal. She’s called them together to stage an intervention for a third daughter (Samantha Soule), who’s addicted to crack. Or is it meth? 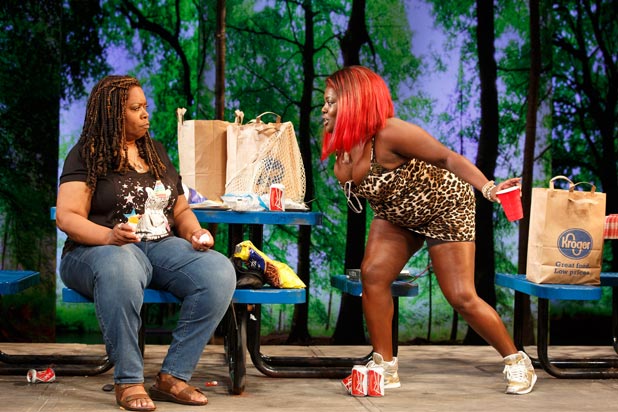 And that’s not the only story that changes drastically in the first two scenes of “Barbecue.” Call it a gimmick or a device, O’Hara does something here I’ve never seen done on stage before, and as that second scene progresses you’ll only gradually see what he’s up to — and how daring a dramatist he is.

The first act is tough to follow. O’Hara effectively switches gears to slice ‘n’ dice movie stars and memoirists. Suffice to say, O’Hara believes they’re a match made in the ninth circle of publicity.

Kent Gash directs an ensemble that also includes Marc Damon Johnson, Kim Wayans, Heather Alicia Simms, Benja Kay Thomas, and Tamberla Perry. They all perform way over the top and each of them deserves to be there.