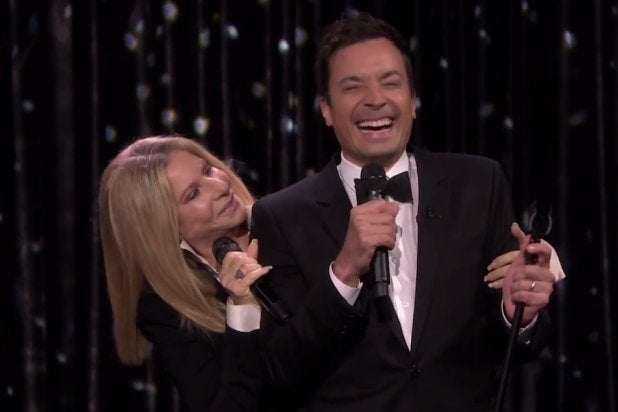 Barbra Streisand is one of the most revered entertainers of the modern era, so it perhaps makes sense that she completely took over “The Tonight Show” on Monday during her first guest appearance in late night in more than 50 years, even if it wasn’t her idea.

Streisand herself admitted that she doesn’t remember all of the shows she’s been on, and took delight in a picture Jimmy Fallon produced of her on Johnny Carson’s “Tonight Show” when she was a teen.

She had to look at it from behind the desk, though, because Fallon insisted she sit there. “This is the first time in over fifty years you’re here, I think you should sit behind the desk,” he said. “Let’s be honest, you’re never coming back here.”

And she stayed there throughout the show, except during her two performances.

She kicked off her night with a medley of some of the duets she performs on her new album “Partners,” available Tuesday. But as Elvis Presley, Blake Shelton and Michael Bublé weren’t on hand for their parts, Fallon ably stepped in.

He admitted to the EGOT winner — a nickname for the exclusive group of only 12 people who have won an Emmy, Grammy, Oscar and Tony award — that he was actually worried about her coming onto the show.

“I was afraid that you were going to be more of a nightmare,” he told her candidly, marveling at how charming and down-to-earth she was. According to Fallon, if there was one person on the planet who’d earned the right to be a diva, it was Barbra Streisand.

She said that she’s “quite ordinary,” and that she and her husband live a simple life. “We don’t really like the big time stardom thing, so we stay home most of the time,” she explained.

“That’s why I’m gonna write a book,” Streisand said. “Because I swear to God these myths are so far-fetched.”

She opened and closed her appearance on the show with song, saying farewell with a solo version of “Come Rain or Come Shine” from her album. The 72-year-old legend was on her game vocally, and more than game for dealing with Fallon’s giddy schoolboy schtick.

“Do you really want to be a singer?” she asked him after their duet. “I wouldn’t give up my night job.”

She quickly clarified that she was teasing him, and that she was actually impressed with his musical abilities. She and her husband are apparently avid viewers of Fallon’s “Tonight Show.” So at least it was a mutual adoration party.