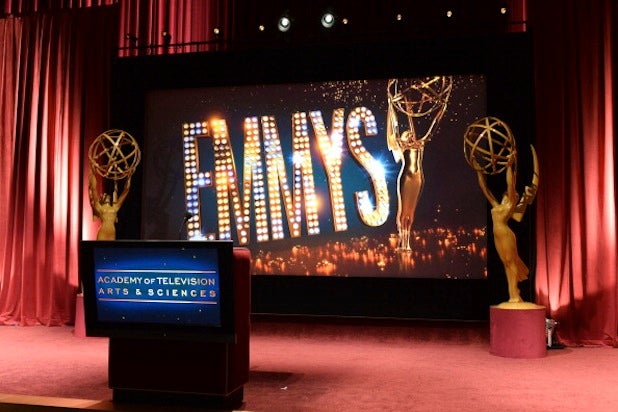 They don’t have the glamour and prestige (or the ratings) of the Oscars, the enormous scale of the Grammys, the looseness of the Golden Globes or the class of the Kennedy Center Honors. They blow through emcees quickly: Seth Meyers will be the 21st person to host or co-host since 2000. They give trophies to the same folks year after year, but they also honor a medium so fast-changing that the crew has been known to employ backstage spotters to remind them who’s who when it comes to the talent.

Oh, and they’re the only major awards show ever delayed for 34 minutes because a football game ran long. (That happened in 1984; the game was Packers vs. Cowboys.)

But the Primetime Emmy Awards, which this year will take place on Monday, Aug. 25 at the Nokia Theatre in downtown Los Angeles, is the biggest night of the year for the medium that still draws the biggest audience and cuts across the most boundaries.

“This is the business where we’ve chosen to make our careers, so the Emmys are special in the sense that this is our turf,” Don Mischer, the executive producer of this year’s Emmys, his 12th, told TheWrap.

Over the last 66 years, the Emmys have brought the kind of surprises, satisfactions and snafus common to all awards shows–beginning that first year, when host Rudy Vallee cancelled at the last minute, and radio personality, songwriter and columnist Walter O’Keefe stepped in to emcee the event at the Hollywood Athletic Club.

Conversations with producers, writers and crew members of dozens of Emmy shows yield lots of backstage glimpses and unguarded moments. Stagehands remember, for instance, an impossibly cheesy dance number devoted to TV theme songs, one that included dancers swirling their arms like helicopters as they came across the stage to the theme from “M*A*S*H.” The most memorable part of the number for some crew members came at rehearsal, when Dick Van Dyke sat in the front row with The Waltons star Richard Thomas, and kept Thomas in stitches with a steady stream of snide comments about the dancing.

In 1985, the Emmys had its own moment to stand alongside the Oscars streaker in 1974, or the performance artist with “SOY BOMB” painted on his chest who crashed a Bob Dylan song at the Grammys. It came when Betty Thomas won a supporting-actress award for ‘Hill Street Blues”–and before she could get to the stage at the Pasadena Civic Auditorium, her Emmy was claimed by an impostor, noted gatecrasher Barry Bremen, who said he was accepting on her behalf. During an ensuing commercial, Thomas was told that she’d be allowed to give an acceptance speech, and stage manager Dency Nelson rushed an Emmy statuette out to the podium only seconds before the break ended. (A Los Angeles Times photographer snapped Nelson’s picture, and the next day’s caption referred to him as “unidentified technician.”)

Nelson also remembered a year the always-neurotic Garry Shandling was hosting, and watching a typically rocky and dramatic rehearsal with Faye Dunaway. “In the wings, Garry turned to me and said, ‘Boy, she’s really a piece of work, isn’t she?'” said Nelson. “And I said, ‘And you’re not?’ He looked at me for a second, and then started laughing.”

Mischer remembered the 1992 show, when Candice Bergen won for “Murphy Brown” and used her acceptance speech to take a shot at Vice President Dan Quayle, who’d called Bergen’s unmarried-mother character a bad example. “The whole show just kind of drifted into political commentary,” said the veteran director and producer. “And there was no way to stop it–if you pick up the microphone during a commercial and say, ‘Please don’t talk about politics,’ everybody will talk about politics.”

The following year, Mischer added, the Emmys endured an attempted boycott at the hands of CBS and NBC, who were angry that the Academy had signed a four-year TV deal with ABC after completing a six-year one with Fox. “The other networks rebelled and didn’t want their talent to do the show,” he said. “We wanted Angela Lansbury to host, because she had the number one show with ‘Murder She Wrote,’ and I know that CBS was not encouraging her. But we’d just worked with her on the Tonys, and she really wanted to do it.” (In one way, though, the boycott worked: The ABC deal was terminated after two years, and a yearly rotation between the four broadcast networks was restored.)

Barbra Streisand belting it out in 2001 despite shoewear challenges

And, of course, the backstage area has provided a steady stream of unguarded star moments. There was the time when Barbra Streisand sang at the 2001 Emmys, and brought shoes that were so uncomfortable that she couldn’t walk in them–so a crew member carried them from her dressing room to the stage, while Streisand made the trip in her stocking feet.

Or the stunt Tom Hanks pulled a decade later, when he took the Emmy he’d won for producing the TV movie “Game Change,” borrowed a roll of packing tape from a stagehand, and turned his statuette into an impromptu hood ornament by taping it to the car that was waiting for him behind the Nokia Theatre.

One show consistently mentioned by Emmy vets came in 2001, when the show was originally scheduled to take place at the Shrine on Sunday, Sept. 16. The show was quickly postponed to Oct. 7 after the 9/11 attacks, and Mischer planned a bicoastal Emmys that would include news icon Walter Cronkite broadcasting from NBC’s Studio 8H in New York. “And then in the middle of dress rehearsal, a few hours before we were supposed to go on the air, a trophy girl came up to me and said, ‘Mr. Mischer, my mother just called me from Kansas and said the Emmys were cancelled,'” he remembered. “Her mother was right–we had no idea, but the U.S. had started bombing Afghanistan that day.” broadcasting from NBC’s Studio

Tom Hanks transforming his Emmy into a hood ornament

Much of the crew had to move on–Mischer to prep for the opening ceremonies of the Salt Lake City Winter Olympics, the stage crew to Nashville for the CMA Awards. New producer Gary Smith stepped in and produced a scaled-down show on Nov. 4 at the smaller Schubert Theatre in Century City.

“Security changed drastically, and it was an odd feeling for all of us,” remembered stage manager Debbie Williams, one of those who worked on the rescheduled show. “The oddest thing was when we went outside to eat our meal on the patio of the Schubert on the day of the show. I looked around, and there were snipers on all the buildings around us. I was like, OK, I sort of feel safer.”

Also read:  5 Questions With ‘So You Think You Can Dance’ Host Cat Deeley: Emmy Nominee Quickie

(Still, the show wasn’t entirely somber: During commercial breaks, screens onstage broadcast the seventh game of the Yankees-Diamondbacks World Series, which was being played later than usual because of baseball postponements after 9/11.)

Since 2008, the Emmys have taken place at the Nokia, which was christened with a widely-panned Emmy show hosted by five nominated reality-show hosts: Tom Bergeron, Heidi Klum, Howie Mandel, Jeff Probst and Ryan Seacrest. Probst told TheWrap that the quintet never agreed about what they wanted to do, and one of the few bits they did have planned was sabotaged at the last minute when their opening number was replaced by an Oprah Winfrey appearance. “Then we really had nothing to do at all, and I was certain that it was over,” said Probst.

Jimmy Fallon fared better when he hosted the show two years later and opened with a version of Bruce Springsteen’s “Born to Run” featuring Tina Fey, Jon Hamm, Betty White, Joel McHale and the cast of “Glee,” among others (video below). “I remember our first meeting with Jimmy in New York, where he said he was passionate about opening the show with ‘Born to Run,'” said producer Charlie Haykel, who works with Mischer. “Not an easy song to clear, because Bruce does not clear a lot of stuff. But Don had just done the Super Bowl with Bruce, and they were friends, so we got it done.”

“We shot the pre-recorded part of it on Friday and Saturday, edited it overnight on Saturday, and turned the cut in during rehearsals. And I remember the screen actors, who were not used to performing before a live audience, just nailing it that night. They came off the stage and they were jumping up and down and high-fiving each other.”

A few months later, added Mischer, he asked Springsteen’s manager, Jon Landau, if he and Bruce had ever watched the opening. “He said, ‘We did–and we watched it over and over again. We loved it.'”