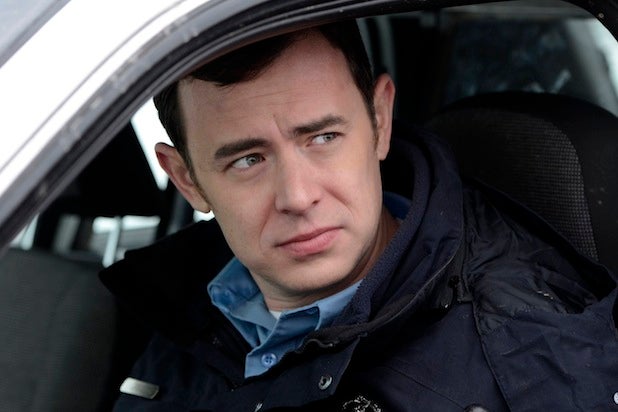 It was not a promising beginning. When Colin Hanks got the screenplay for the first episode of Noah Hawley‘s “Fargo,” a miniseries inspired by but not based on the Coen brothers movie, Hanks’ character — timid Duluth policeman Gus Grimly — didn’t appear until one of the script’s final scenes. And when he did show up, Gus pulled over Billy Bob Thornton‘s implacably murderous Lorne Malvo, but then let him drive away when Malvo explained, with icy calm and abundant menace, that it would be in the best interests of Gus and his teenage daughter not to interfere.

A milquetoast who doesn’t appear until the end of the episode and then lets the bad guy go? That’s hardly a dream role — except that Hanks had a sense it could be, with nothing to go on but the quality of Hawley’s writing and a promise from the show runner.

“I had no idea how much more I was going to be in the show,” Hanks told TheWrap. “But Noah wrote such a fabulous screenplay that I thought, if the rest of the scripts are as good as this, I have to be in it no matter how small the role is. And Noah was very adamant — he said, ‘Gus is going to be a main character. I’m just not playing by that convention that I have to introduce my characters in the first five pages.’ And that was incredibly exciting. I thought, if he’s introducing a main character 40 minutes in, imagine the stuff we’re going to play with later on.”

His trust in Hawley was rewarded with an Emmy nomination for Outstanding Supporting Actor in a Miniseries or a Movie — the first of his career for Hanks, the oldest son of another 2014 Emmy nominee, Tom Hanks, and an actor whose TV career has also included “Mad Men,” “Dexter” and “Roswell.” The nomination was one of 18 for “Fargo,” second only to “Game of Thrones” as the most-nominated program. “I knew that it would get some nominations, but never thought that I would get nominated. I just didn’t feel the role was that flashy. It’s an amazing role, but Gus is not a very emotive character. He’s got the weight of the world on his shoulders pretty much through the entire thing, and he internalizes everything. But the way they shot this, they never skipped over the little tiny moments that led you into Gus’s mind.”

Gus also ends up with one of the most interesting arcs of any character in the 10-episode FX miniseries. (Warning: Spoilers ahead.) Over the course of the series, Gus shows he’s a good father but a fairly inept cop; he panics and accidentally shoots Allison Tolman’s Deputy Molly Solverson, with whom he’s becoming romantically involved; and after the series abruptly jumps forward a year, he ends up out of the force, working as a mailman, married to Molly and the father of her unborn child. And in the final episode, the guy who let Malvo get away at the beginning of the season guns him down at the end.

“With that ending, so many people were saying, ‘Oh wow, Gus is a hero,'” said Hanks. “And I actually look at it in the opposite way. Once again, Malvo is forcing Gus to do something against his will. Gus doesn’t want to kill Malvo. He knows he has to, and once again he puts that burden on his shoulders. In no way did I think it was heroic. I actually thought it was incredibly sad.”

And will Gus be back if, as rumored, there’s another season of “Fargo” in the works? “I don’t know,” Hanks insisted. “There’s been all sorts of rumblings, a bunch of different scenarios, but I don’t really know what they are. My pat line with all things in regards to ‘Fargo’ is, I can neither confirm nor deny anything.”