Producers Adam Shankman and Bill Mechanic admitted Wednesday afternoon that Sacha Baron Cohen has dropped out of the Oscar show because of creative differences, but strongly denied that his departure has anything to do with fears that his “Avatar”-themed skit would have offended that film’s director, James Cameron.

Baron Cohen and Ben Stiller were to appear in a skit in which the British comedian would appear as a female Na’vi, from "Avatar," and reveal that "she" is pregnant with Cameron’s child.

The Vulture blog said the skit was axed over fears that Cameron would be offended and might walk out of the Kodak Theatre.

“We did not take the skit out because we wanted to protect Jim Cameron,” said Mechanic, who was an executive at 20th Century Fox when Cameron made “Titanic” for the studio. “If anybody has a reason not to protect Jim Cameron, it’s me. We did a movie together, and he was impossible and difficult and at times as antagonistic as you could ever ask for.

"I mean, I think he’s incredibly talented, and I’m stunned by what he did with ‘Avatar.’ But I’m not gonna sit there and worry that he doesn’t have a sense of humor. I mean, he’s a fairly hardy soul."

An Oscar show insider who did not wish to be identified says the reason the skit was removed from the show was simpler: "It was a little too MTV for everyone."

“But this is the Oscars,” added Mechanic. “We’re not going to do something that doesn’t fit the Oscars.”

When the Academy nixed that idea, the producers booked the British comic known for the characters of Borat and Bruno to perform a skit on the Oscar show instead.

And now, with less than a week to go before the show, they’ve reportedly parted ways with Baron Cohen over “creative differences.” At issue: a skit that, some feared, might offend “Avatar” director James Cameron.

According to New York magazine’s Vulture blog, Baron Cohen and Ben Stiller were writing a skit in which the British actor would appear in full makeup as a female Na’vi from Cameron’s film. He would speak Na’vi while Stiller translated, but as the skit progressed the inadequacy of the translation would anger Baron Cohen, until he’d pull open his gown to reveal that “she” was pregnant with Cameron’s child.

Vulture says the skit was eliminated over fears that Cameron would be offended; the Academy confirmed that the actor would no longer be appearing on the show, and Baron Cohen’s spokesperson wrote it off to “creative differences.” 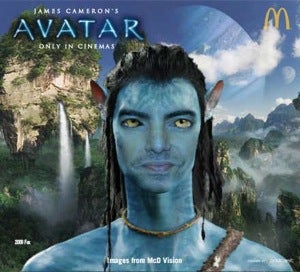 For a taste of what a Na’vi-styled Baron Cohen might have looked like, here’s what happened when I fed a picture of the actor into the “Avatarize Yourself generator” that was briefly hosted by McDonalds (right).

The skit is hardly the first Oscar-show component to be axed at the last minute: last year, for instance, concerns over the length of the show caused at least one package of video clips to be eliminated while the show was in progress.

A gospel song envisioned as a collaboration between Annie Lennox, Elvis Costello, Sting, current nominee T Bone Burnett and the other musicians behind the two nominated songs from “Cold Mountain” was killed the day before the show in 2004, despite vehement protests from Costello.

And 15 years ago, David Letterman had planned to auction off a car on the stage of the Shrine Auditorium during his one ill-fated stab at hosting the Oscars. Letterman had promised to give away a car in the initial press release announcing his selection as host, and he and his writers were determined to follow through.

The raffle, of course, was to be rigged, and initially the Letterman staff badly wanted it to go to “Driving Miss Daisy” actress Jessica Tandy. When it was gently explained to them that Tandy had died six months earlier, and thus would not be attending the Oscars, they switched the recipient to Sally Field.

After a significant amount of rehearsal time devoted to the logistics of driving the car onstage so that the winner could hop into the driver’s seat immediately, Letterman scrapped the giveaway minutes before the show’s dress rehearsal.