Over at Gold Derby, Tom O’Neil loves making bold pronouncements about the Oscar race. Lives for it, in fact. He has fun with the game, and more power to him.

His latest bold pronouncement, in which he explained why “Inglourious Basterds” would win the Oscar for best picture, has been stirring up lots of talk in Oscar-blogging circles, where we all love to sit around and talk about what each other is saying.

And his theory does bear a little examination (and a little disputation), since he’s predicting that Quentin Tarantino will sail to victory based on momentum from a Hollywood guild that doesn’t even like him. 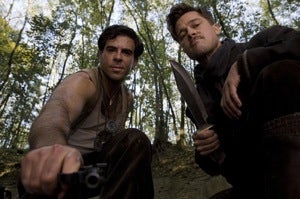 And then he explains just why he thinks Tarantino will win the DGA Award, which means he’ll win the Oscar, which means “Inglourious Basterds” will be named best picture. (Photo: Eli Roth and Brad Pitt/The Weinstein Company)

Basically, his argument is that Tarantino still has the cool factor, along with a big hit movie, that will make him an irresistible choice in a year in which his competitors will be “refried beans” like Clint Eastwood and Peter Jackson. He thinks the buzz on “Nine” is quieting, hurting Rob Marshall’s chances, and he doubts that Jason Reitman can win, and he thinks Kathryn Bigelow will be nominated, “but women rarely triumph at these ole boys’ clubs.”

His conclusion: “Therefore, by process of elimination, it looks like Tarantino is the likely front-runner, which means ‘Inglourious Basterds’ is probably ahead for the top Oscars, too.”

Now, I thought “Inglourious Basterds” was a thoroughly entertaining movie, and I think it’ll probably get (and probably deserve) one of those 10 best-picture Oscar nominations. It’s not a slam-dunk, but I expect it to get in.

But I don’t expect it to roll to victory after picking up momentum at the DGA Awards. And I certainly don’t expect the “old boys club” to shun people they’ve liked before, ignore a well-liked and hard-working young director coming into his own, and use gender as an excuse to shun the director of one of the best-reviewed films of the year.

Because if the DGA is an old boys club, Tarantino is not one of the old boys. He’s not a member of the guild, never has been, and that fact has definitely caused some ill will within the organization.

When I asked a friend inside the DGA about Tarantino, the response came quickly: “He’s not very well liked around here.”

Unlike the Writers Guild, the directors do nominate non-DGA members for their top awards. But look at their winners over the last 20 years: all members.  ("Slumdog Milionaire" director Danny Boyle was not a member at the time of his win, but he joined soon afterwards.) Tarantino was only nominated for the guild’s top honor once, for “Pulp Fiction,” back when most of the DGA brass were convinced that he’d eventually join.

Another problem with O’Neil’s “DGA win = Oscar directing win = Oscar best picture win” equation, besides the fact that the Oscars didn’t match four times in the past 11 years, is that this year the two Oscar races are being counted in completely different ways.

The directing Oscar will use the old-fashioned one-member, one-vote format; best picture will use the preferential system, which will look for a consensus and will take into account second- and third-place votes. The result probably will be even more splits between director and picture.

I just don’t think there’s enough affection for “Inglourious Basterds” for it to prevail in a preferential tally. And I suspect that its delirious historical revisionism won’t exactly resonate among voters who’ve long embraced more reverent World War II films.

But even it does somehow win over the Academy (which, after all, loved Tarantino at the Governors Awards last weekend), I’d be amazed if Tarantino uses the DGA as his springboard to Oscar gloury. Because, you know, those guys kind of think he’s a basterd.

Sorry, Tom. I’m not buying this one.