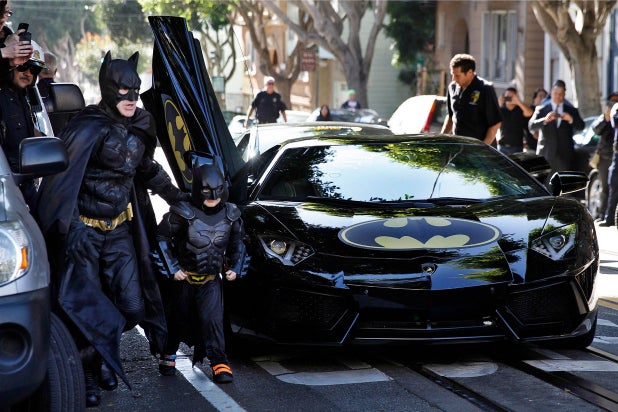 Why does America need Batkid? It’s an emergency.

Americans are at each others’ throats. Instead of a one-for-all, all-for-one nation, we’ve become a Thomas Hobbes nightmare state. Our public life is a civil war, each against all. In a big study, most U.S. employees report weekly abuse by their bosses; bosses report that if they weren’t the bad guy, they’d lose power and be the ones getting abused. Neighbors attack neighbors, then take sides. When tens of thousands of Americans gather, it’s typically to protest a race killing.

To the rescue comes Miles Scott, the most irresistibly adorable five-year-old cancer patient you ever saw. After three years battling leukemia, Miles wanted to be “the real Batman.” So the also irresistible, telegenic, and fear-defying Patricia Wilson, executive director of the Make-a-Wish Foundation of the Greater Bay Area, made his wish come true on November 15, 2013.

An estimated 25,000 San Franciscans thronged to Union Square and City Hall as Miles donned a very cool bespoke Batman suit, hopped into a donated Lamborghini Bat-car with his also Bat-suited and gizmo-wielding mentor, stuntman and former LucasArts video game programmer E.J. Johnston, and, summoned by the chief of police, foiled the Riddler and the Penguin and rescued a damsel in distress (Johnston’s movie-star cute wife Sue) tied to the cable car tracks.

Hans Zimmer composed a Bat-theme for Miles. Apple donated its PR team for a week. The mayor gave him the key to the city (to Miles’s visible disappointment, it was not a giant chocolate key, as he’d expected), and the Hollywood stars who played Batman congratulated him. So did President Obama, who tweeted a video saying, “Way to go Miles! Way to save Gotham!” An even higher authority, Julia Roberts, announced she would produce a movie of Miles’ story. Perhaps 1.7 billion people tuned in to see Miles save San Francisco, reimagined as Gotham City.

For a kid from the toolies — tiny Tule Lake, California, near Oregon — the sight of 25,000 people joining his fantasy was perplexing. He asked why all those people were dancing. “Believe it or not, they’re doing it for you,” E.J. told him.

“Batkid Begins,” Dana Nachman’s documentary about the planning and execution of Miles’ bats–t-cool adventure, is a lot better than you think it would be: The editing is ruthlessly efficient, and some of the talking-heads scenes are dramatized via lively comic-book renditions that lend visual panache. All the characters grab you, not just the kid.

There is tension — Bay Area Bat-day was essentially a giant flash mob theater piece with no public rehearsal. Things could, and did, go wrong with the complicated plan. And anyone who has ever supervised a five year old, even one without a potentially mortal illness, knows that a big day can turn into a big drag on a dime. Kids get tired, scared, shy. Indeed, Miles tried to bail partway through, making it all the more thrilling when the young superhero Batmans up, flexes his costume-enhanced muscles, and saves the day.

Nachman, who earned three Emmys and an Edward R. Murrow Award, plus three film festival awards for “Batkid Begins,” is noted for serious docs about child molestation allegations (“Witch Hunt”), dangerous chemicals (“The Human Experiment”) and terrorism (“Love Hate Love”). “Batkid Begins” is serious too, but it’s mostly a delightful ride that leaves you with a tear and a smile. Miles, in remission, still has his Batsuit and continues to keep Americans safe. And maybe this, the most soul-soothing of superhero movies, will keep Americans just a little bit safer from each other.